Affleck: I am fighting for my family

BEN AFFLECK has revealed he is ‘fighting for myself and my family’ after completing a 40-day rehab stint — and thanked his supporters in a heartfelt message today.

Affleck is in the middle of a divorce from Daredevil actress Jennifer Garner, with whom he shares three children, and it was she who drove him to this, his third bout of rehab, in August.

But the troubled Batman star spoke warmly of his family, thanking them for their support as he took to Instagram today.

Affleck, who has received treatment for alcohol issues twice before, in 2001 and 2017, also acknowledged that he will ‘never really [be] out of treatment’ and thanked fans who have reached out with their own ‘inspiring’ stories of addiction. 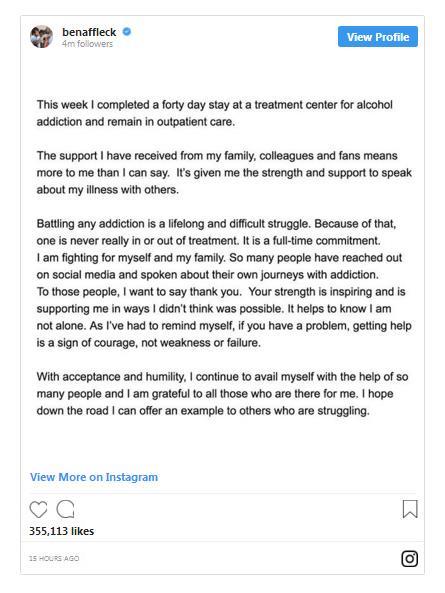 Posting on the photo-sharing site, he wrote: ‘‘This week I completed a forty-day stay at a treatment center for alcohol addiction and remain in outpatient care.

‘The support I have received from my family, colleagues and fans means more to me than I can say. It’s given me the strength and support to speak about my illness with others.

‘Battling any addiction is a lifelong and difficult struggle. Because of that, one is never really in or out of treatment. It is a full-time commitment. I am fighting for myself and my family.’

He added: ‘So many people have reached out on social media and spoken about their own journeys with addiction. To those people, I want to say thank you. Your strength is inspiring and is supporting me in ways I didn’t think was possible. It helps to know I am not alone. As I’ve had to remind myself, if you have a problem, getting help is a sign of courage, not weakness or failure.

‘With acceptance and humility, I continue to avail myself with the help of so many people and I am grateful to all those who are there for me. I hope down the road I can offer an example to others who are struggling.’

A source told People magazine this week that Affleck seems to be taking this rehab stint ‘more seriously’.

‘This time is different,’ the insider said. ‘He doesn’t want his kids to have to go through this again. Ben is really trying very hard to get better.’

NEXTCara Delevingne takes to the street to reflect plight of homeless