AMANDA HOLDEN’S approval ratings have hit a new low — and it’s all down to the depth of the V-neck on that infamous Britain’s Got Talent dress.

The BGT judge wore the eye-popping backless, navel-grazing dress back in June and now it turns out this was the most complained about thing on TV this year — and let’s not forget she had some pretty stiff competition.

But Amanda’s dress — or lack of it — was what really got viewers going, with almost double the number of calls to the telly regulator at 663.

And that figure doesn’t even include the number of people posting their disapproval on social media.

One wrote at the time: ‘So Amanda is effectively topless on Britain’s Got Talent tonight.’

Another vented on her Instagram account: ‘Sorry, Amanda, but this is a family show & the dress looks so cheap and nasty.’

But we suspect Amanda is urepentant given that before the latest series of BGT kicked off, she told The Sun: ‘Will people be complaining to Ofcom? I hope so. I really do. I haven’t done my job if they aren’t.’

And it doesn’t look like she’s planning to put ’em away any time soon as this pic, posted just six days ago before her appearance at London Fashion Week, proves: 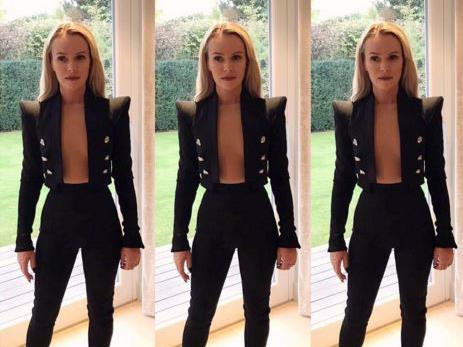 We think she’s covering her modesty with a flesh-coloured top here, but it’s difficult to tell and she’s certainly still courting cleavage controversy.

NEXTLiam Gallagher: Our kid’s a vegetarian trying to sell you a kebab