THE devil was in the detail when rocker Dave Grohl stunned a lucky bartender by leaving a demon of a tip.

His devilish gesture left fans applauding his generosity and humour when a picture of the receipt was shared on Facebook by one barfly. 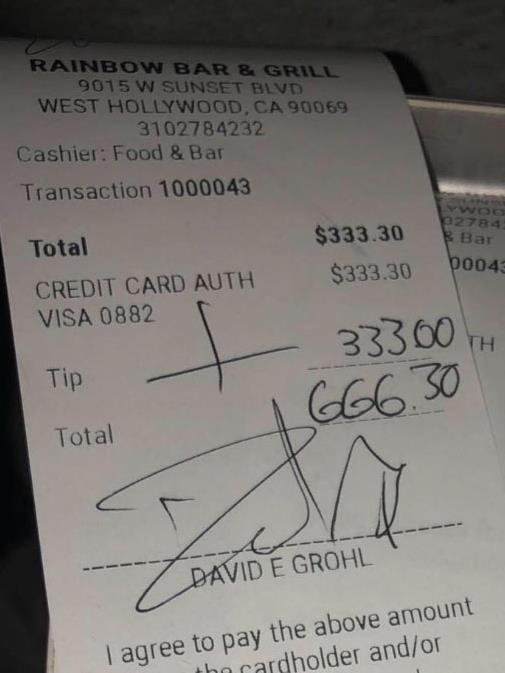 The My Hero singer’s display of benevolence came after he bought a round of drinks during a pop-up gig at the Rainbow Bar & Grill in Los Angeles.

And he thrilled punters further by happily agreeing to pose for selfies with them.

One fan landed a grip’n’grin when Grohl saw that he was wearing a Nirvana T-shirt — the grunge band he drummed for in the 1990s — to the bash. Thrilled by the encounter, Len Catling tweeted: ‘I knew I wore my @Nirvana shirt for a reason. Thanks for the picture #davegrohl. Honor to meet you!’

Grohl, who is reported to be worth £215million, has been bang on form in the humour stakes recently.

After losing his voice last week, he was forced to postpone shows in Edmonton and Calgary, Canada,.

The illness coincided with U2’s Bono shelving gigs after suffering a similar ailment, and Grohl joked: ‘That’s the last time I ever make out with Bono.’