ARIANA GRANDE has pointed out what she perceives to be Piers Morgan’s own double standards after his recent disparaging comments about Little Mix and Ellen DeGeneres.

The Good Morning Britain host, 53, sparked controversy this week when he criticised a nude image of the girl group, which was intended to champion body positivity, for not only ‘using sex to sell records’ but also copying the idea for the shoot from US band Dixie Chicks.

But it was when the outspoken presenter had a go at US chatshow host DeGeneres’s ‘hypocrisy’, for airing a video of famous men with their tops off, that the God Is A Woman singer — and her mum — got involved.

Yesterday, Ariana’s mother Joan scolded Piers, tweeting: ‘Honestly what is wrong with you @piersmorgan? Didn’t your mother ever teach you, if you have nothing nice to say, don’t say it!

‘You came for @TheEllenShow yesterday which was disgraceful, she is an angel. @LittleMix today, did you ever hear of paying homage? And..well never mind.’

Piers came back with: ‘Hi Joan, my mother taught me to speak my mind & never be afraid to express honestly held opinion. Ellen’s a hypocrite — and as for Little Mix, I’d just prefer they use their talent to sell records rather than their nudity. As your own daughter does…!’

Then Ariana herself joined in, tweeting: ‘Ellen is an incredible & kind human being.. I use my talent AND my sexuality all the time because i choose to. women can be sexual AND talented. naked and dignified. it’s OUR choice. & we will keep fighting til people understand.’

She signed off with a reference to her latest single: ‘I say this w all due respect but Thank U, Next.’

Of course, Piers wouldn’t let it lie, responding: ‘Hi Ariana! How lovely to hear from you so soon after your mother.

‘Women can do what they like — but if they/you use nudity to sell records to impressionable young female fans, I’ll continue to call them/you out on it.

‘All due respect, but thank YOU. Next…’

The 25-year-old retorted: ‘Also @piersmorgan, i look forward to the day you realize there are other ways to go about making yourself relevant than to criticize young, beautiful, successful women for everything they do.

‘i think that’ll be a beautiful thing for you and your career or what’s left of it.’

She then posted an old image of Piers posing almost naked for Burger King, asking: ‘When u do it it’s ok tho right?’

To which Piers playfully asked: ‘Is that your screensaver?’ before, in now trademark style, challenging Ariana to appear on GMB to settle their dispute — adding: ‘We can bring our mothers too, if you like.’

As an amusing side note to this story, Piers’s son Spencer posted wryly in response to the spat that any chance he’d had of dating Ariana were well and truly done for, tweeting his dad: ‘Ahh ffs there go my chances.’ 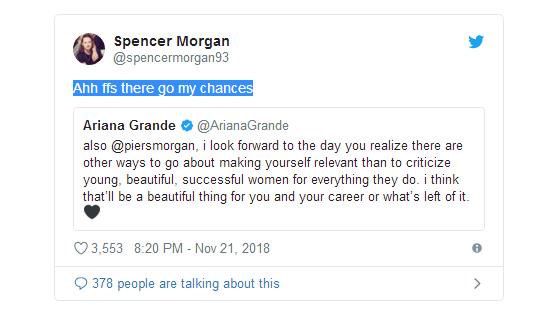 NEXTMyleene Klass’ night out with fella no drag