ARIANA GRANDE has confessed she still finds it difficult to talk about the Manchester Arena bombing at her concert last year.

It came as the US pop star was thanked by the city for her support after the attack.

The singer was starring in a TV special, Ariana Grande At The BBC, where she performed and discussed her life, with host Davina McCall (both pictured above).

The show was the first time Grande had been on the BBC since her One Love Manchester gig in June last year. It was held to pay tribute to the 22 people who died and the hundreds who were hurt in the terror attack at her concert weeks earlier. 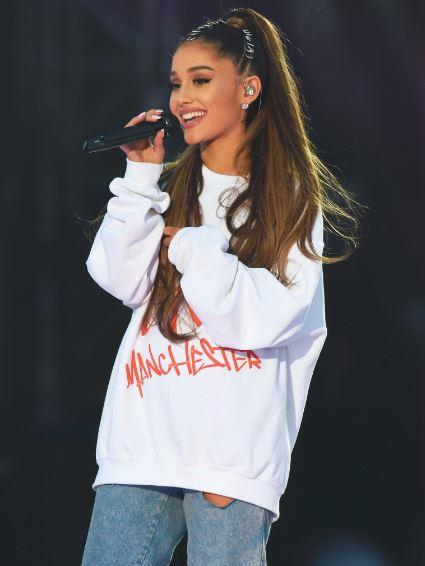 One Love raised millions for the We Love Manchester fund and Grande was made an honorary citizen of the city.

The 25-year-old was spared talking about the terror attack in the BBC Music programme, as McCall thanked her for returning to the city and arranging the fundraising show so quickly.

The God Is A Woman singer was shown a video of Manchester residents praising her for ‘loving our city’ and for her ‘incredibly important’ work. Others called Grande an ‘adopted Mancunian’.

McCall told her the UK had ‘taken you under our wing’, to which Grande quietly said ‘thank you’ and lowered her gaze. She simply said ‘yeah’ when agreeing that the attack was ‘hard to talk about’.

Grande did openly discuss her personal battle with anxiety, and admitted she felt guilty to have such issues because she felt so privileged. She said she sometimes had anxiety attacks and would have ‘a couple of down days’.

The star added: ‘It feels so silly, because I feel like the luckiest, most blessed girl in the world, so I almost feel guilty that I have it.

‘It’s just in your head and it’s so crazy how powerful it is, no matter how good things are. It can totally change everything. It takes hard work and therapy and self-care and so much love.’

Grande performed hits including No Tears Left To Cry, God Is A Woman and One Last Time, with an all-female backing band and orchestra.

NEXTVictoria Beckham still in the dosh despite her Spice Girls snub