Bake Off’s Candice Brown: I put on my wedding dress and cried after body-shaming

GREAT BRITISH BAKE OFF winner Candice Brown has hit back at online trolls after she received abusive comments on social media that knocked her body confidence ahead of her wedding day.

Brown, 33, fought back tears as she revealed some of the body-shaming remarks she received over pictures of her in a bikini while on holiday with friends.

Brown, who won the seventh series of Bake Off, told ITV’s Lorraine: ‘I put my wedding dress on and I burst into tears because I was terrified I wasn’t going to fit into it.

‘It’s fine, but also, what precedent are we setting for young girls and young boys? And I get married in two and a half weeks, I’m fine the way I am.

‘I didn’t ask for those pictures to be taken of me on holiday, neither did my girls, one of which has just had a baby.

‘But the onslaught from that was just horrendous, and as a teacher teaching secondary schools, I spent nearly 10 years trying to teach students, “You’re OK as you are, everyone’s different, everyone’s a different shape, size, everything.” And then to be having to justify myself.’

Brown, who also took part in reality show Dancing On Ice, will marry fiance Liam Macaulay in two and a half weeks’ time.

After appearing on the ITV show today, Candice retweeted a message of support from the show, thanking Lorraine and her viewers for being ‘so supportive and amazing’. 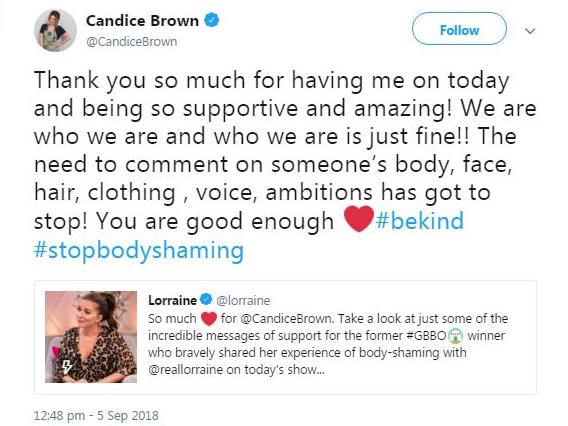 Also on the show, she referenced the appearance of US plus-size model Tess Holliday on the cover of magazine Cosmopolitan as she warned that publicly criticising people for their physical appearance set a bad example for future generations.

Good Morning Britain host Piers Morgan was among those to criticise Cosmopolitan’s decision to put Holliday on the cover, calling it ‘dangerous and misguided’.

Brown said: ‘Everybody’s fine the way they are. You look at Tess Holliday on the front of Cosmopolitan, she looks incredible. Who are these people to say, “That’s not right. You should be this, you should be that”?

‘No, because Instagram isn’t real life. Real life is that. Real life is wobbly bits and stretch marks. I love cake, I love baking, it’s going to happen. I have an incredible fiancé, I have incredible friends and family, but I am also human.

‘I’m annoyed at myself that it got to me. But it did. On the other side of that, I’m OK now. We need to be setting a better precedent for the younger generation.’