BARRY MANILOW has joked he’d like to run for president — and promised ‘everybody will get laid’ if he gets in.

The 74-year-old Copacabana singer seemed to be kicking Christmas off early as he took to social media with the somewhat leftfield sugestion.

‘I know. I’ll run for president. I’ll make some romantic music,’ he posted suddenly, after a couple of days’ break from Twitter.

Barry followed this up later with a play on Trump’s ‘Make America Great Again’ campaign slogan. 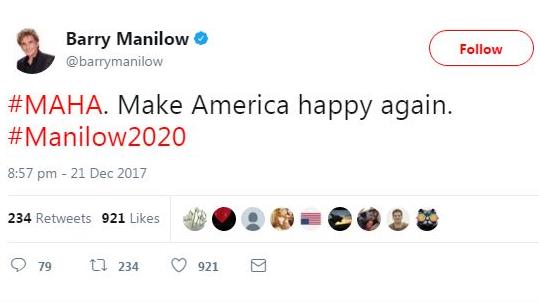 The suggestion met with an enthusiastic response from the Mandy singer’s legions of fans.

One wrote: ‘You’ve got my vote… Manilow for president 2020, make America kind again, and the whole world will sing!’

Another fan from further afield commented: ‘I’m a UK citizen, but I’d vote for you!’

Not everyone was so keen on the reference to getting their rocks off, though, with one asking if Manilow was ‘reliving the 60s’.

Another wrote: ‘Please please…my mom calls you that mice [sic] barry boy… please dont encourage the romatic get laid stuff. Even though I’m 50, I dont need to think about my mom and dad doing that.’

But most people thought his presidential plan was a great idea — although one had some concerns about skeletons in Barry’s closet.

‘OK, but you’re going to need to explain that incident at that nightclub with a showgirl named Lola,’ they joked.

PREVIOUSJust Who is Miranda giving a Hart-y snog?

NEXTRihanna calls for end to gun violence after ‘cousin shot’