BATMAN stars have joined together in paying tribute to the caped crusader of 1960s telly — Adam West.

West died on Friday, aged 88, after a short battle with Leukaemia, and many of the other actors who have played the masked vigilante rushed to praise him.

‘Kind, funny and an all around great guy. Thank you for showing us all how it’s done. @therealadamwest,’ he tweeted.

West was very supportive of Affleck taking on the role from Christian Bale, telling him: ‘Ben, you’re going to be very good. Shave the beard, make that costume work for you.’

Meanwhile, Will Arnett, who voiced Batman in this year’s The Lego Batman Movie, wrote simply: ‘RIP Adam West. You will always be Batman.’

‘Ah dear Adam West. He was always so kind when we met,’ he wrote.

‘Once when I was a kid we found ourselves in front the batmobile. I got in.’

And Star Wars actor Mark Hamill, who also worked with West, commemorated him with a montage. 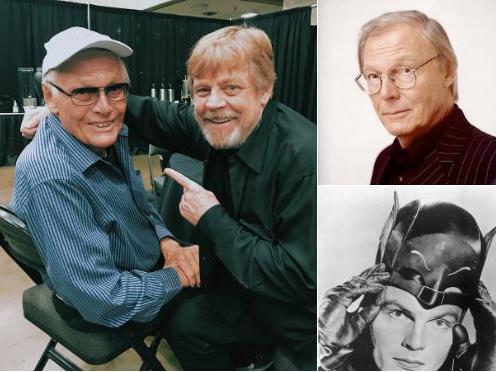 He captioned it: ‘#AdamWest was such a wonderful actor & so kind, I’m so lucky to have worked w/ him & tell him how much he meant to me & millions of fans.’

‘Family Guy has lost its mayor, and I have lost a friend,’ he wrote.

‘Adam West was a joy to rk [sic] with, and the kind of guy you always wanted to be around.

‘His positivity, good nature, and sense of fun were undeniable, and it was always a big jolt of the best kind of energy when he walked in to record the show. He knew comedy, and he knew humanity.’