Brad Pitt gets photobombed by Bradley Cooper at Glastonbury

BRAD PITT’s attempt to enjoy a low-key visit to Glasto was royally rumbled when he was mistaken for a competition winner… and photobombed by Bradley Cooper.

Musician Chris Simmons managed to collar Pitt backstage for a selfie — only to discover he had snapped another Hollywood star, Cooper, pulling a cheeky face from behind. 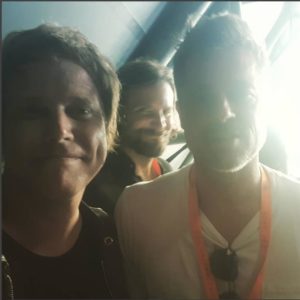 Simmons captioned his selfie: ‘When you get your photo with Brad Pitt photobombed by Bradley Cooper!’

Royal Blood — Mike Kerr and Ben Thatcher — also persuaded the 53-year-old to pose with them ahead of their set on the Pyramid stage on Friday. Tongue-in-cheek, the rock duo captioned their pic: ‘Congratulations to our competition winner — William Bradley Pitt.’

Cooper appeared on the Pyramid stage with Kris Kristofferson on Friday to shoot a scene for his upcoming film A Star Is Born. Kristofferson, 81, starred in the 1976 version opposite Barbra Streisand.