Can Hugh Jackman prove himself The Greatest Showman on live tour?

THE Greatest Showman fans are over the moon as star Hugh Jackman announced a first today — he will perform songs from the hit film live when he visits the UK during his debut world tour.

The Golden Globe-winning actor, who portrayed American showman PT Barnum in the box office smash, will play four dates backed by a full orchestra in May and June next year.

Entitled ‘The Man. The Music. The Show’, the tour will see Jackman performing well-loved tunes from The Greatest Showman and Les Miserables, the other film musical that he fronted, playing the lead Jean Valjean, in 2012 — as well as Broadway classics.

Announcing the news on Instagram, the actor — known for playing Wolverine in the X-Men series — told fans he would arrive in the UK in May 2019. 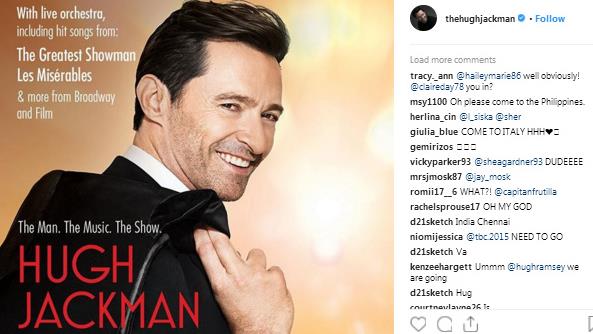 Reactions ranged from disbelief to joy, with one commenting: ‘Is this real? I’m there’, while another wrote simply: ‘NEED TO GO’.

Hugh will perform at the Manchester Arena on May 24, Birmingham’s Resorts World Arena on May 27 and the O2 Arena in London on June 2 and 3.

The Greatest Showman was a box office success despite lacklustre reviews from critics — and its soundtrack remains in the UK album top five nearly a year after its release.

In both the UK and America it reached multi-platinum status, selling more than two million copies apiece.

Tickets will go on sale at 9am on December 7

NEXTRobbie Williams: Forget the Brits… The X Factor tops it all