AZEALIA Banks may be a one-woman feud-generating machine, but by her own admission she’s been doing some ‘growing up’ lately — and that has resulted in a shock apology to her old nemesis Nicki Minaj today.

The feud between the pair goes back to 2012, when Azealia declined to support Nicki on tour and Nicki tweeted ‘#ManTheseBitchesDelirious’.

Azealia took this as a reference to herself and responded with a now-deleted Twitter rant that included telling Nicki to ‘slim down a bit’ because ‘your butt make [sic] some really expensive dresses look really cheap’.

But today Azealia took to her Instagram account to reveal an exchange between the two in which it looks like she took the initiative and apologised for her previous ‘catty’ behaviour.

In a series of texts, she wrote: ‘I want to apologise for whatever catty s*** I’ve said to and or about you in the past… Now that I’m growing up I’m realising a lot about what it means to be a strong woman and you’ve showed nothing but strength and perseverance from day one.’

She also vowed to mend her ways, saying: ‘You have my word. That from here on out, I will never say anything negative or catty things about you ever again.’

And it appears Nicki was willing to let bygones be bygones, as Azealia posted a screenshot that read: ‘You’re very talented & very smart. Focus on what really matters from now on.’ 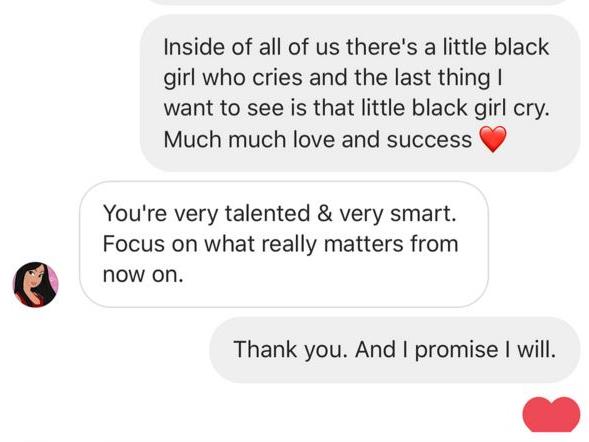 Azealia, who has been involved in a number of other high-profile feuds with stars from Iggy Azealia to Russell Crowe, seems to have been moved by Nicki’s magnanimity, as she commented: ‘Not gonna lie, I cried a bit when she responded.’

It is not know what moved Azealia to make the apology today, but it might have something to do with the fact an insult she fired off this week at fellow rapper Cardi B — whose hit Bodak Yellow just went to the top of the singles charts — spectacularly backfired.

Azealia had called Cardi a ‘poor mans Nicki’, but Cardi posted the perfect non-bitchy response — a video of Azealia herself dancing to the track, captioned: ‘Cuz even the HATERS love it!’