STORMY DANIELS seems to be creating her own media storm — after first pulling out of Celebrity Big Brother at the last minute then today missing a spot on Loose Women to explain herself.

The adult film star — who previously alleged she had an affair with US president Donald Trump — seemed to be a coup signing for the Channel 5 show when hints at her involvement were heavily trailed before its launch yesterday.

But according to an insider, Stormy ‘point blank refused’ to go into the house last night as scheduled.

‘From the outset it was clear something was wrong and once she sat down with the producers all hell broke loose. They just didn’t get on,’ the source said, adding: ‘No one could work out why she’d fly all the way from the US to London before deciding to drop out. Let alone turning down that massive fee.

One explanation might be a beef about her fee, however, as the source told The Sun: ‘Eventually her people said she would go on for an extra £100,000, but CBB said no, so she just walked away.’

But today further confusion was caused after ITV’s Loose Women appeared to have bagged Stormy for an exclusive interview — only for the star not to appear after all.

Around lunctime the ITV show tweeted: ‘Stay tuned for @StormyDaniels coming up on the show later to explain why she’s NOT in the CBB house.’ 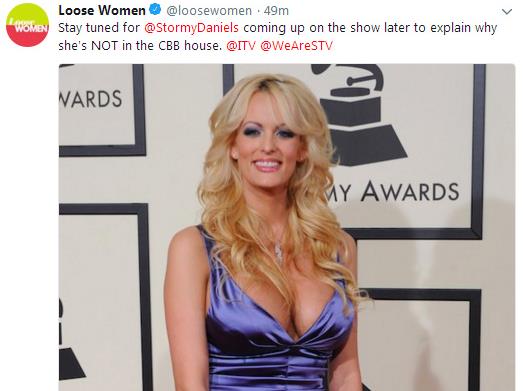 This time the issue was definitely not about money — and panellist Jane Moore, who spoke to Stormy off-camera, revealed it never had been.

‘She says that late last night she was due to be on Celebrity Big Brother and there was a custody development involved her daughter in America, she is in the middle of a divorce. She showed me an official email,’ Jane said.

‘She thought, “I can’t commit.” She said being a mother comes first. What she wanted to do was sort that out.’

Jane added: ‘She says the stories about her asking for more money are rubbish.’

She also claimed Stormy had offered to appear on CBBs live launch to explain the situation, but was told she could not.

PREVIOUSPussycat’s out of the bag on Strictly’s latest star

NEXTMaya won’t make a Jama out of pay crisis