CHERYL and Liam Payne have called time on their two-and-a-half-year relationship — after rumours circulated earlier this year that the pair were in trouble.

The singers announced they were ‘going our separate ways’ in nearly-identical posts to their 40million Twitter followers.

The former Girls Aloud star, who turned 35 on Saturday, and One Direction member, 24, have a one-year-old son, Bear.

The parents said separating had been ‘a tough decision for us to make’.

The statement added: ‘We still have so much love for each other as a family. Bear is our world and we ask that you respect his privacy as we navigate our way through this together.’ 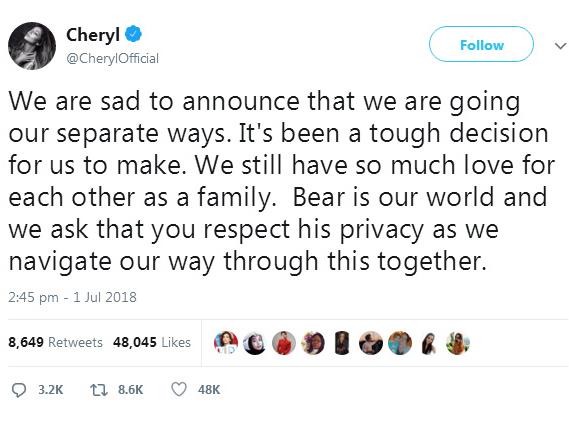 Cheryl and Payne first met on The X Factor in 2008, when she was a judge and he auditioned as a solo contestant, then 14 years old.

They welcomed their son in March last year after being an item since 2016.

In February this year the pair put on a public display of unity at the Brit Awards amid speculation over their relationship.

Cheryl later hit back at reports that their appearance had been a ‘stunt’, saying the suggestion was ‘just ludicrous and a bit weird’.

On Mother’s Day, Payne paid tribute to his partner, tweeting: ‘Thanks for making the first year of my sons life incredible I’ve never seen love like this before.’

Later in March, Cheryl responded to images of her partner and another woman, saying she was an ‘innocent dancer colleague of Liam’s who has a fiancé’.

She described speculation over the images as a ‘desperate attempt to try to cause problems between Liam and I’.

According to The Sun, the couple amicably agreed to separate two weeks ago.

Hours before their split was announced on Sunday, Payne reminisced about his rise to fame in a Twitter post.

He said: ‘When I auditioned for X factor 10 years ago I had a hole in my George Asda shoes, borrowed Armandi [sic] jeans from a friend just a 14 year old boy with big dreams … crazy what ten years can do… thank you.’

The couple’s split follows a string of celebrity relationship breakdowns in recent months.

Channing Tatum and Jenna Dewan, Jennifer Aniston and Justin Theroux, Ariana Grande and Mac Miller, and Jack Osbourne and Lisa Stelly are also among the couples announcing that they have called it a day.

At least Zayn Malik and Gigi Hadid, who confirmed they had split in March, have reunited.

PREVIOUSStars glam up for polo as Meghan keeps it casual