COLEEN ROONEY has announced she and hubby Wayne are expecting again — after playing down reports of a pregnancy just last month.

The footballer’s wife today confirmed in a Twitter post that her fourth child is on the way.

‘So Happy!!!’ she wrote. ‘Never denied the news, but I was always protecting it!! 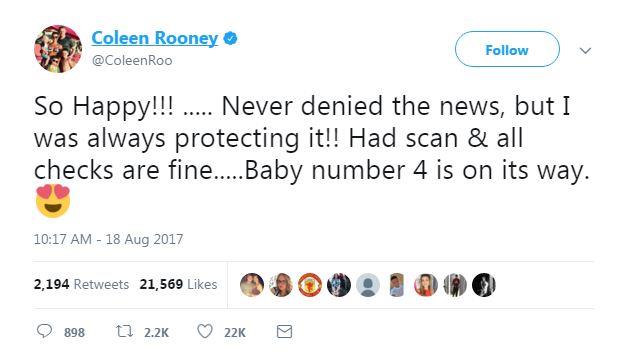 Just last month, Coleen claimed that she had just ‘put weight on’ while enjoying the school holidays with her three existing children: Kai, eight; Klay, four; and Kit, one.

Coleen has previously said it ‘would be nice’ to add a girl to her all-boy brood, but said the gender of her child is not something she will get ‘upset about or dwell on’.

We just wonder what K she will come up with if it is a girl as the Kardashians have kind of cornered that market.