DECLAN Donnelly has announced he will carry on presenting Saturday Night Takeaway without his longtime buddy and co-host Ant McPartlin — even though he previously said he’d never go it alone.

This Saturday’s show has already been cancelled following Ant’s decision to return to rehab after causing a three-car collision while reportedly under the influence at the weekend — and fears had been expressed that this could be the end for Dec too, as the pair have always said they come as a package.

But now it appears Dec’s loyalty to his audience is even greater than his loyalty to his pal, as he took to Twitter today to explain he would be fronting the March 31 show and the programme’s finale a week later.

‘Whilst I never thought I’d be in this position,’ Dec wrote, ‘after much discussion and careful consideration we’ve decided that the remaining two shows of this series of Saturday Night Takeaway will go ahead.

‘We made a promise to take hundreds of deserving winners to Florida to watch the series finale, and we will honour that.

‘Everyone at ITV and the Takeaway team feels we owe it to the audience to complete the series.’

Dec’s statement marks a distinct contrast with the words the pair wrote in their 2010 autobiography Ooh! What A Lovely Pair, in which they insisted ‘neither one of us would ever be on our own out there’. 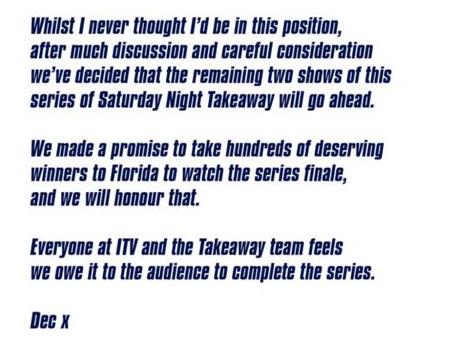 ITV also made a statement, which seemed to rule out the possibility of someone else standing in for Ant.

It read: ‘We can confirm that Saturday Night Takeaway, presented by Declan Donnelly, will return to ITV on March 31, and the series finale will be taking place at Universal Orlando Resort in Florida a week later.’

Meanwhile, McPartlin was interviewed again by police today, who confirmed that: ‘A 42-year-old man attended a west London police station today and was interviewed under caution.

‘He’s been further released under investigation.’

In a statement on Monday, McPartlin’s publicist said: ‘Ant has decided to go back into treatment and step down from his current TV commitments.

‘He has spoken with Dec and ITV today and asked for time off for the foreseeable future. As such, Saturday Night Takeaway will not be going ahead this Saturday.’

To cover for the show this weekend, ITV has pulled forward an episode of The Voice UK.

NEXTSelena who? Justin Bieber spied at gig with a bikini babe