LAMBORGHINIS might fly before Drake once again pays homage to Michael Jackson at his live shows.

The God’s Plan rapper serenaded fans as a fluorescent sports car floated above Manchester Arena on the opening night of the UK leg of his The Assassination Vacation world tour.

But Drizzy slammed on the brakes on his tribute to the late King of Pop, which has been a feature of his previous shows. 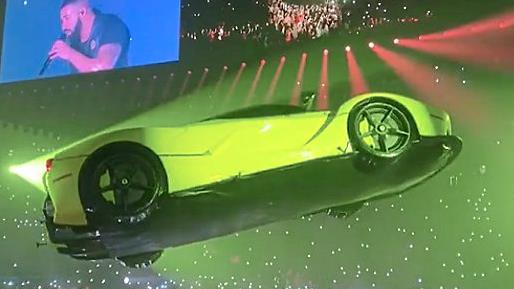 The 32-year-old has been singing his tune Don’t Matter To Me, featuring vocals from Jacko taken from one of the star’s North American shows in 1983.

However, he has dumped it from his set list after fans were left horrified by child abuse allegations aimed at Jackson in two-part documentary Leaving Neverland, which aired on Channel 4.

Away from the controversy, Drake partied the night away with football rivals Jesse Lingard, of Manchester United, and Man City striker Sergio Aguero backstage.

The Canadian star, who jetted to the UK on Sunday, will play seven nights at London’s O2 Arena while he is here.