Singer Kelsy Karter gets tattoo of Harry Styles on face

A SINGER desperate to record a song on Harry Styles’s next album has taken her campaign to jaw-dropping lengths — and had his face tattooed on her cheek.

Kelsy Karter had the inking, which covers the side of her face, done in Los Angeles in honour of Styles’s 25th birthday this Friday and shared the results on Instagram. ‘Mama, look what I made me do,’ she wrote.

New Zealand-born Karter, who has written an as yet unreleased song for Styles’s former One Direction bandmate Zayn Malik, recently tweeted: ‘It’s 2019 and Harry Styles is still the best looking human.’

The 24-year-old also hinted that she was planning a surprise for the idol, writing: ‘Finally know what I’m getting Harry for his birthday.’ 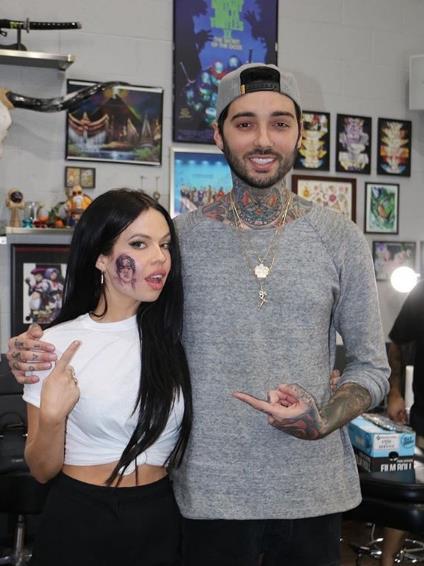 It’s not known if Karter and Styles are friends or if they have even met. But she told i-D magazine of her admiration last July. ‘What I love about him from a professional standpoint is that he was the poppiest of pop stars, then went off on his own and made a classic rock album,’ she said.

‘He has opened the door for me. He’s introduced the kids to the kind of music I want to make. I also just want his career. I feel like I’m a female version. I moved to America to act, and music became my main thing. Rock’n’roll is my passion.’

Karter, whose debut single was The Revolution in 2012, went on: ‘I really want to work with him. Let’s work, Harry. Where you at? Mark my words: I’m getting a song on his album.’

Her new single is called Catch Me If You Can. Will she get her wish — or will Harry think she’s got a bit of a cheek?