Has Nile Rodgers funked up his George Michael release?

NILE RODGERS has admitted to ‘uncertainty’ over whether he should remix George Michael’s Fantasy — which got its first airplay this morning.

Fans mostly reacted positively when the funked up track was featured on The Chris Evans Breakfast Show this morning, but when one admitted to ‘mixed feelings’ the Chic frontman shared his own doubts.

‘You should have mixed feelings,’ he tweeted. ‘No one’s heart was dragged through emotional ambiguity more than mine.’ 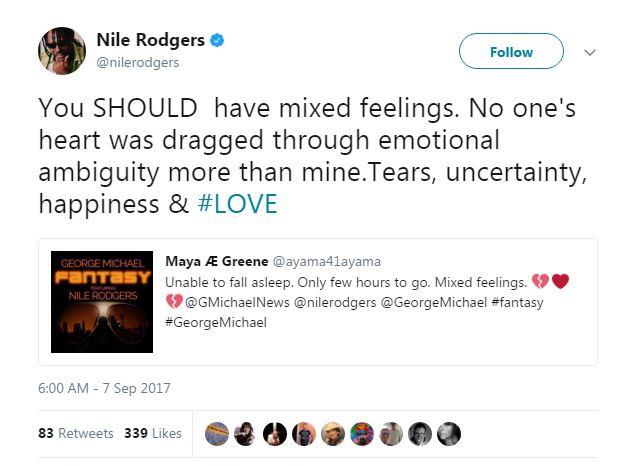 He needn’t have worried, though, as more than one fan thanked him for ‘keeping [the ex-Wham! singer’s] music alive’.

Another enthusiast wrote: ‘That was AMAZING… love Nile’s riff throughout and so so miss my George’s voice. In tears yet again.’

One emotional fan speculated that the track might become a chart-topper, writing: ‘Number One it is then! Fantasy sent shivers down my spine. Sooo miss George Michael.’

Not everyone loved it, though, with one branding the original, which was previously released as a B side in the 1980s, ‘far superior’.

Another tweet was particularly damning: ‘The beginning sounds like the cat (from the 1970s Charlie’s said adverts) has come out of retirement… it’s about time Nile Rogers retired.’ Me-ouch!

PREVIOUSStrictly’s Shirley Ballas on BBC equal pay and that ‘curse’