THE course of true love never did run smooth but Cara Delevingne’s romance with Ashley Benson seems to be blossoming.

The model — recently spotted kissing the US actress at Heathrow — took her along to a special interactive screening of Romeo + Juliet at Secret Cinema in London.

And it appears Ashley is now firmly part of Cara’s inner circle, as the Briton’s sisters Poppy and Chloe joined them to watch Baz Luhrmann’s 1996 version of Shakespeare’s classic play. 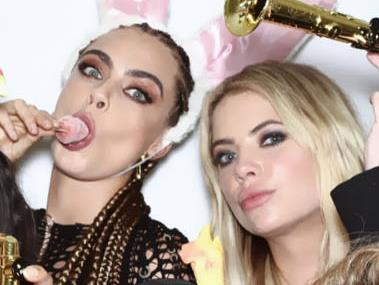 Model Adwoa Aboah was also in attendance as the cool crowd donned Montagues and Capulets-inspired clobber to enter an immersive Verona beach setting.

Cara, 26, also invited Pretty Little Liars star Benson, 28, to her birthday bash last week. She has been smitten by her after previously dating Michael Jackson’s daughter Paris — a namesake of Romeo’s rival for Juliet’s affections.