The actress, 28, has been desperate to fly under the radar with the 41-year-old former Mr Gwyneth Paltrow… for example, when they turned up separately at Beyoncé’s gig in Los Angeles this week.

Dakota did admit, ‘I am very happy’, but continued her ban on sharing more details by adding: ‘I’m not going to talk about it.’

The Fifty Shades Of Grey star was more comfortable talking about how she loves being sexed up on screen.

‘Playing sexual characters is interesting to me,’ she said, vamping away for Tatler.

‘I find it powerful. I’ve always been fascinated by women who are in touch with their sexuality, who are proud of it, who are not passive about it. I don’t think that in order to be respected and in order to feel powerful that you need to be sexless.’ 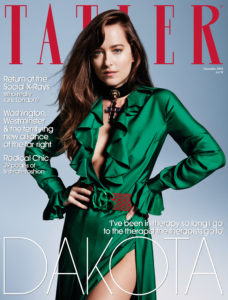 See November’s Tatler, out on Monday

PREVIOUSStrictly’s Kate: I pulled out all the stops to play Penelope