KEVIN HART has stepped down as host of the 2019 Academy Awards over alleged homophobic tweets he posted nearly a decade ago — within hours of posting a video intended to shrug off the controversy.

On Tuesday, the comedian described the role as ‘the opportunity of a lifetime’ after being named host of the 2019 Academy Awards.

But shortly afterwards, tweets he originally posted between 2009 and 2011, which contained offensive language towards the LGBT community, resurfaced.

Hart, 39, responded by sharing a video and caption on Instagram, in which he said he had ‘evolved’ and that he now loved ‘everybody’.

In the black-and-white footage, a shirtless Hart said: ‘I swear man, our world is becoming beyond crazy. I’m not going to let the craziness frustrate me or anger me especially when I worked hard to get to the mental space where I’m at now.

‘My team calls me, “Oh my God, Kevin, this world is upset about tweets you did years ago.”

‘Guys. I’m almost 40 years old. If you don’t believe that people change, grow, evolve as they get older, I don’t know what to tell you. If you want to hold people in a position where they always have to justify or explain their past, then do you. I’m the wrong guy, man. I’m in a great place, a great mature place where all I do is spread positivity.’

Hart, who has starred in films including Ride Along and Night School, wrote in the caption urging people to ‘stop looking for reasons to be negative’ and ‘angry’.

He added: ‘If u want to search my history or past and anger yourselves with what u find that is fine with me. I’m almost 40 years old and I’m in love with the man that I am becoming. You LIVE and YOU LEARN & YOU GROW & YOU MATURE. I live to Love….Please take your negative energy and put it into something constructive.

‘Please….What’s understood should never have to be said. I LOVE EVERYBODY…..ONCE AGAIN EVERYBODY. If you choose to not believe me then that’s on you….Have a beautiful day.’

But no video could undo the damage of his past tweets, it seems, as he later took to Twitter to announce he was stepping aside.

He said: ‘I have made the choice to step down from hosting this year’s Oscar’s… this is because I do not want to be a distraction on a night that should be celebrated by so many amazing talented artists.

‘I sincerely apologise to the LGBTQ community for my insensitive words from my past. I’m sorry that I hurt people… I am evolving and want to continue to do so. My goal is to bring people together not tear us apart. Much love & appreciation to the Academy. I hope we can meet again.’ 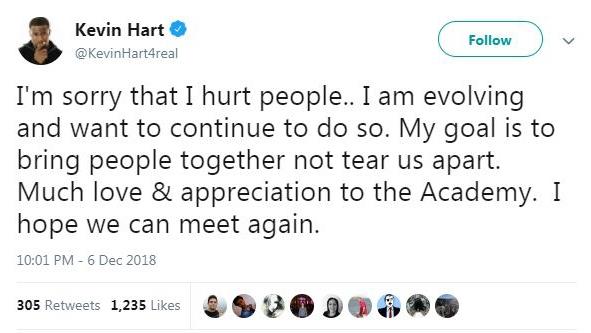 Hart would have been just one of a handful of African Americans to host the Oscars, following on from stars including Chris Rock, Whoopi Goldberg and Sammy Davis Jr.

Possible replacements being mooted for the role, described by The Hollywood Reporter as ‘the worst job in town’, are three-time Golden Globes hosts Tina Fey and Amy Poehler; Mary Poppins Returns duo Emily Blunt and Lin-Manuel Miranda; and our very own Ricky Gervais.

The Oscars will take place in Los Angeles on Sunday February 24.

NEXTLauren Steadman’s out of Strictly as Ashley Roberts is saved