James Van Der Beek reveals he too was sexually harassed

JAMES VAN DER BEEK has shared details of his own experiences of being groped by unnamed ‘older, powerful men’ — and has accused disgraced movie mogul Harvey Weinstein of ‘criminal’ behaviour.

Proving it is not just female stars who are vulnerable to ‘casting couch’ creeps, the former Dawson’s Creek star took to Twitter this morning to speak up for the many women — including Cara Delevingne, Gwyneth Paltrow and Angelina Jolie — who are alleging the producer made unwanted sexual advances towards them.

He wrote: ‘For anyone judging the women who stayed silent, read this for perspective. Also for anyone brushing off harassment as “boys being boys”.

‘What Weinstein is being accused of is criminal. What he’s admitted to is unacceptable — in any industry. I applaud everybody speaking out.’

James then revealed his own past painful encounters. 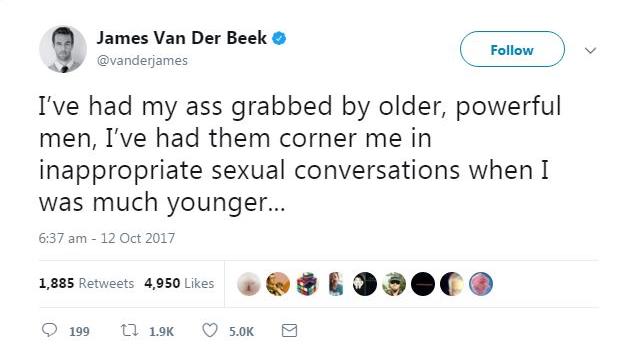 ‘I’ve had my ass grabbed by older, powerful men,’ he posted.

He then went on to explain the ‘shame’ victims of assault feel and how ‘impossible’ it feels to press charges.

‘I understand the unwarranted shame, powerlessness & inability to blow the whistle,’ he wrote.

‘There’s a power dynamic that feels impossible to overcome.’

Another male star who has spoken out about the scandal is Family Guy creator Seth MacFarlane, who claims a joke he made at the 2013 Oscar nominations was a direct dig at the powerful producer.

It was as Seth announced the best supporting actress that he quipped: ‘Congratulations, you five ladies no longer have to pretend to be attracted to Harvey Weinstein.’

MacFarlane now claims this was because his friend — actress Jessica Barth — had confided in him about an alleged attack.

On Twitter, he wrote that after hearing the story: ‘I couldn’t resist the opportunity to take a hard swing in his direction.’

Some commenters, however, blasted Seth for not speaking out at the time, but Jessica had some pretty strong words for them.

‘To the people slamming Seth for not “doing” anything, please STOP!’ she wrote.

‘He stood by me and respected my wishes that he not retaliate in any way.’

She added: ‘How about applauding him for being one of FEW men in Hollywood speaking out!’