JAMIE VARDY may be eating dinner solo for a while after voting for his wife Rebekah to scoff some truly stomach-churning stuff for her tea in last night’s I’m A Celebrity.

The footballer’s wife put a brave face on eating fermented duck egg soup, lamb’s anus, an insect sarnie and a whole ostrich’s foot, among other horrors — but she won’t be pleased to learn her hubby voted for her to do the bushtucker trial no fewer than five times.

Posting on Twitter, Jamie said it was to show how ‘fearless’ she is: 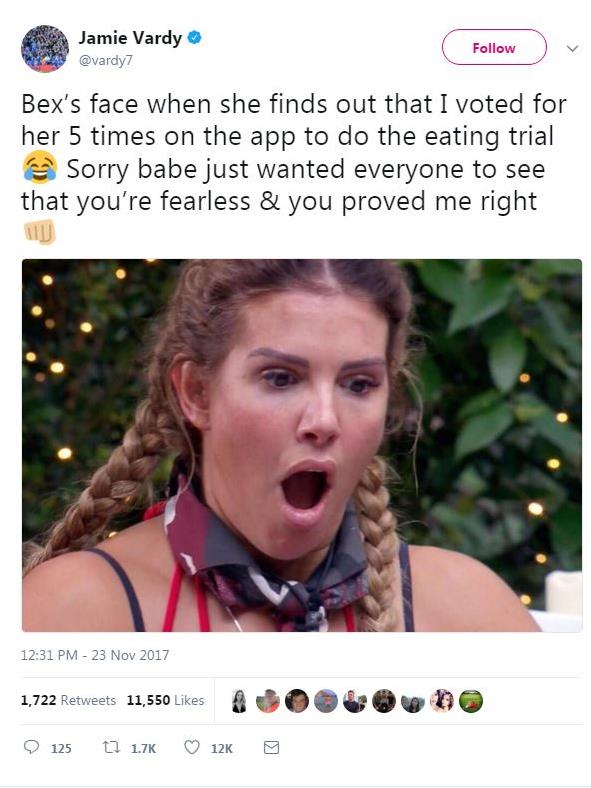 But that explanation is unlikely to fly as, before undergoing the ordeal, Rebekah said: ‘If my husband has voted for me to do this trial, he’ll be in so much trouble.’

In case you’re wondering, both the lamb’s anus and ostrich’s foot tasted ‘like chicken’, Rebekah said — although she changed her review of the former to ‘a baby’s nappy’ after a few more chews.

But it was her campmate Georgia Toffolo who really drew the short straw — her ‘pudding’ was a whole bull’s penis.

Nevertheless, the pair somehow managed to swallow down the lot, winning themselves a meal of quail and mangoes.

And Rebekah can take a lot of the credit for getting her Made In Chelsea campmate through the ordeal, as she saucily pointed out: ‘This is easy, you’ve put worse than that in your mouth. I have.’

I’m A Celebrity… Get Me Out Of Here! continues tonight at 9pm on ITV