JULIA ROBERTS may be new to social media but she’s already issued the perfect slapdown to one critic.

The Pretty Woman star (pictured), 50, only joined Instagram in June, but she seems to have got the hang of it nicely after one commenter had the temerity to call her nail polish ‘ugly’.

The comment was made after an Instagram account called TheVintageCostumeCollecter posted a picture of Julia at the Toronto Film Festival side by side with another screen siren, Joan Crawford, both wearing similarly striking, dark, floor-length gowns with shoulder pads. 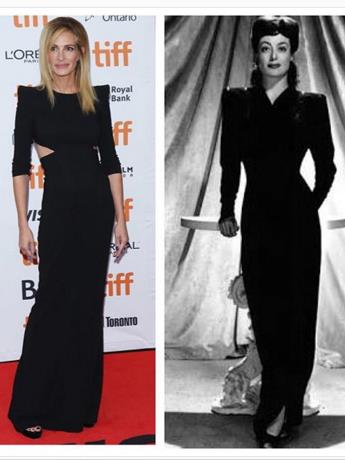 It posed the question: ‘Who wore it better?’

But Julia could not let this slide, hitting back with: ‘It is in fact a navy polish with garnets crystals as a grounding accent. In case you would like to edit your comment from ‘ugly black nail polish’ to ugly navy polish with Garnet crystals. Just sayin’.’

And fans loved her straight-talking.

‘EPIC!!! Absolutely the best response EVER!’ wrote one, while another said: ‘I admire your class’.

Also, hearteningly, many asked why the two Hollywood icons were being made to compete in the first place.

‘Why are you pitting two ladies together, in this day and age… THATS ugly imo….. they both wear it well, both classic beauties and great actors of their times,’ wrote one.

Julia wore the dress and polish at a screening of her latest movie, addiction drama Ben Is Back, on September 8.