JUSTIN BIEBER allegedly punched a man who had grabbed a woman by the throat at a Coachella party, it was claimed last night.

Biebs is said to have jumped to her defence when the culprit refused to release his grip.

‘Justin and his friend screamed at the guy to let her go, but he screamed back “Go f*** yourself”,’ a source told TMZ. ‘At that point, Justin hit the man in the face allowing the woman to break free.’

Meanwhile, another of Bieber’s exes has been romantically linked to The Weeknd.

The Earned It singer, 28, was spied getting cosy with model and DJ Chantel Jeffries at the music bash. The Weeknd recently broke up with Selena Gomez, 25, who went on to reignite her romance with Bieber. 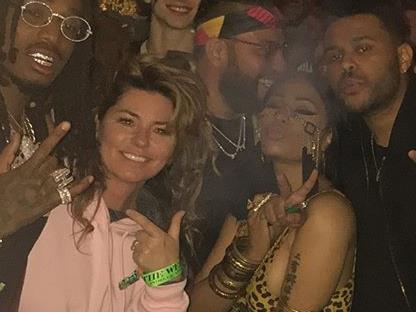 ■ AND the best picture from Coachella belongs to… Nicki Minaj and unlikely new pal Shania Twain. The pair struck up a friendship backstage. ‘@shaniatwain is so dope,’ Minaj gushed. Also in the Instagram snap, which received over a million ‘likes’, were singer The Weeknd and Call Me By Your Name actor Timothée Chalamet.

PREVIOUSRiRi taking the plunge to stand out from crowd