JUSTIN Timberlake has admitted he may not have handled things as well as could have when he accidentally revealed Janet Jackson’s breast live on stage at the Super Bowl in 2004.

Speaking to DJ Zane Lowe on Beats 1 radio station yesterday — ahead of his Super Bowl return next weekend — Justin held his hands up about the incident.

‘I stumbled through it,’ he told Lowe, referring to the fallout.

‘To be quite honest, I had my wires crossed.

‘It’s just something that you have to look back on and go, “OK, you can’t change what’s happened, but you can move forward and learn from it.”‘

Justin also claimed to have ‘made peace’ with Janet over the incident, which saw her fined and blacklisted by MTV and US radio while he largely continued to enjoy their support — as evidenced by his invitation to perform again this year.

Speaking about a reconciliation with Janet, Justin said there ‘absolutely’ had been one.

‘I don’t know that a lot of people know that,’ he said, adding: ‘I don’t think it’s my job to [discuss] that because you value the relationships that you do have with people.’

Now some people are urging Justin — a vocal supporter of the Time’s Up movement — to show some solidarity with Janet and invite her to perform alongside him.

Or as one tweeter put it when news of his Super Bowl comeback first broke: ‘JUSTIN! Perform with Janet and have her rip your shirt and reveal a nipple!’ 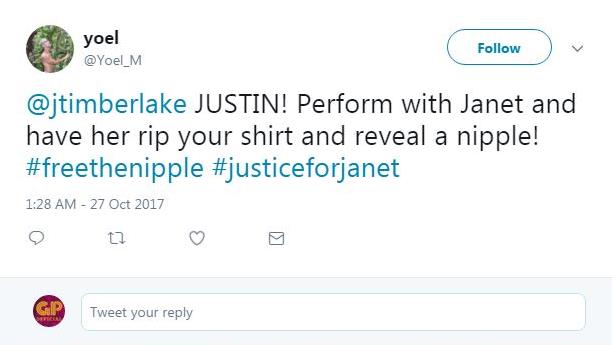 Timberlake has not responded to these suggestions, but it doesn’t look likely considering that, when the 2004 incident was raised in his Super Bowl talks this time, he dismissed it like this.