Kanye, Celine and Ryan Reynolds get into an unlikely Deadpool debate

THREE people you don’t expect to be sharing social media bantz are Kanye West, crooner Celine Dion and Hollywood actor Reybolds — but that’s exactly what happened when the rapper gave the new Deadpool 2 soundtrack a listen.

It seems the hubby of Kim Kardashian, who is given to making controversial Twitter pronouncements, thought the songs sounded familiar.

But he didn’t seem to be too bothered, tweeting: ‘I love both Deadpool movies… I heard tracks in it that sound similar to mine… bro I would have cleared my music for Deadpool.’ 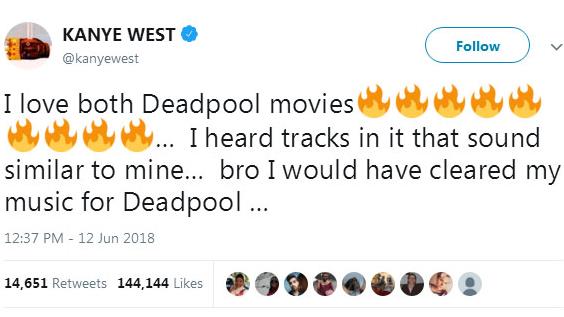 That would have been that but for Deadpool’s star Ryan Reynolds then chipping in, saying he’d ‘have a word’ with Celine, who sings Ashes in the movie sequel.

And fortunately, the My Heart Will Go On crooner didn’t take offence either, teasing that ‘Ashes (Yeezy Remix) does have a nice ring to it’.