KANYE WEST is doing things in his own unique way, as usual — by writing a philosophy book in ‘real time’ in a series of tweets.

Yesterday, the rapper took to the social media site, beginning by advising his followers: ‘When you first wake up don’t hop right on the phone or the internet or even speak to anyone for even up to an hour if possible.

‘Just be still and enjoy your own imagination. It’s better than any movie.’ 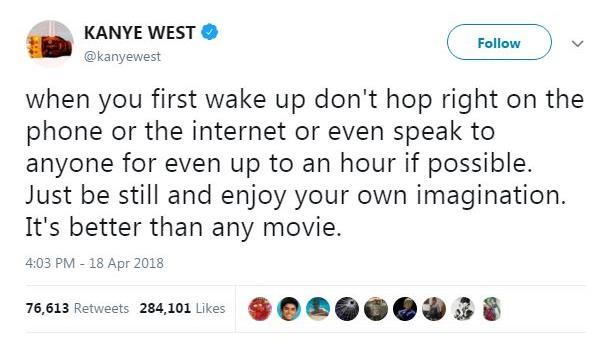 After these sage words, a flurry of further tweets followed, including: ‘Don’t follow crowds. Follow the innate feelings inside of you. Do what you feel not what you think. Thoughts have been placed in our heads to make everyone assimilate. Follow what you feel.’

And possibly referring to his well-known fallings out with Taylor Swift and fellow rapper JAY-Z, he added: ‘I don’t believe in the concept of an enemy. We have been conditioned to always be in competition. Stop looking for something to beat and just be.’

After eight such bon mots, West casually revealed: ‘Oh by the way this is my book that I’m writing in real time.’

Sounding a typically bullish note, he added: ‘No publisher or publicist will tell me what to put where or how many pages to write.’

And in case anyone was cynical about his endeavour, he said: ‘This is not a financial opportunity this is an innate need to be expressive.’

Followers should prepare themselves for quite the onslaught as Kanye said: ‘I will work on this “book” when I feel it. When We sit still in the mornings We get hit with so many ideas and so many things We want to express.’

And many of the star’s 7.44 million Twitter followers approved, with one simply responding, ‘hell yeah’, while another speculated if Kanye’s wise words were actually him ‘leaking lyrics’.

But not everyone was so impressed. When he tweeted: ‘If you wanna see the true character of person watch the way they treat someone who can’t do anything for them’, one Twitter user shot back with: ‘We’ve seen your true character when u interrupted Taylor Swift!!’

We’ll leave you with this thought from the man himself: ‘Truth is my goal. Controversy is my gym. I’ll do a hundred reps of controversy for a 6 pack of truth.’ Well, quite.