DON’T expect to see Katy Perry waving a white flag any time soon — after she called on Taylor Swift to ‘finish’ their feud.

While appearing on James Corden’s Carpool Karaoke, the Roar singer said it was up to Swift to bury the hatchet.

‘She started it and it’s time for her to finish it,’ she said. ‘I tried to talk to her about it and she wouldn’t speak to me. Then she writes a song about me and I’m like, “OK, cool. That’s how you wanna deal with it?”’ 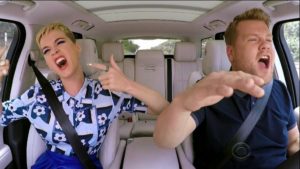 Perry continued: ‘You do something and trust me, daddy, there’s going to be a reaction — it’s all about karma.’

The star said she is ‘ready for the BS [bulls***] to be done’. Their spat started in 2014, when Swift, 27, wrote Bad Blood — allegedly about the fallout of their friendship.

Perry, 32, appears to have hit back with her new song Swish, Swish (featuring Nicki Minaj) which she called ‘a great anthem for people to use whenever someone is trying to hold you down or bully you’.