KATY PERRY says her love affair with Orlando Bloom had a sizzling start — when he swiped a burger from her table.

Now the pair are both taking a bite at marriage after the Lord of the Rings actor proposed on Valentine’s Day.

‘We bonded over an In-N-Out burger about three years ago at the Golden Globes,’ Katy, 34, told chat show host Jimmy Kimmel.

‘He stole one off my table. I was sitting with Denzel Washington and he took it. I was like, “Wait! Who-oh, wow, you’re so hot. Fine, take it.”’

Flashing her pink diamond engagement ring, she continued: ‘Then I saw him at a party and was like, “How are those onions sitting on your molars?” He was like, “I like you” and then, you know, cut to…’ The Roar singer, previously married to Russell Brand, needed no time to chew over her answer when Bloom, 42, popped the question on Valentine’s Day. 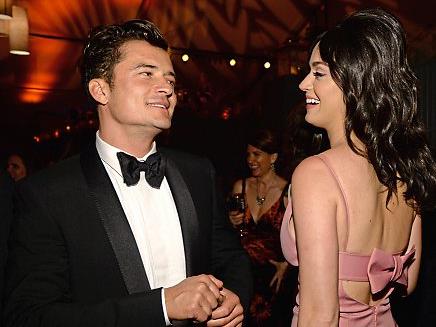 ‘He asked me to marry him in a helicopter. We landed on a rooftop [in Los Angeles] and my whole family was there, and all my friends. He did so well,’ said Katy. But the American Idol judge said not everything went to script. Orlando, who has an eight-year-old son Flynn with his ex-wife Miranda Kerr, ripped his jacket pocket and smashed a champagne bottle as he tried to pull out the ring box.