KIT Harington demonstrated he’s as adept at strategising as his famous character Jon Snow — when he and girlfriend Rose Leslie posted news of their engagement in a decidedly old-school way.

The Game Of Thrones heartthrob threw everybody off the scent last night when he turned up solo to the premiere of new BBC drama Gunpowder, denying fans the chance to check Rose’s ring finger amid rumours that he recently got down on one knee.

But this morning the news was out — in the form of a low-key announcement in The Times. 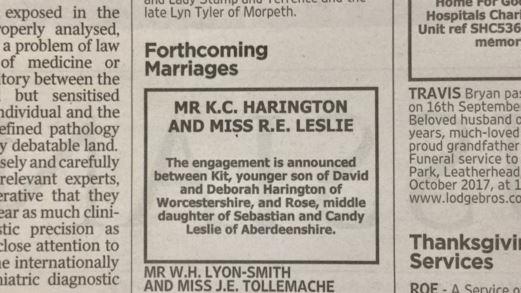 The notice, which referred to Mr KC (Kit Catseby) Harington and Miss RE (Rose Eleanor) Leslie, read simply: ‘The engagement is announced between Kit, younger son of David and Deborah Harington of Worcestershire, and Rose, middle daughter of Sebastian and Candy Leslie of Aberdeenshire.’

Many fans appreciated the quaint nature of the announcement between the pair, who first met playing lovers in the HBO series.

‘So cute and old school yo!’ tweeted one, while another joked: ‘They posted the banns! My Regency-loving romance heart is swooning!’

A non-Brit took the opportunity to highlight the cultural divide.

‘Lol is this true? British are so extra,’ they wrote.

‘He should get a prenup which says that in event of divorce “YOU OWE NOTHING, JON SNOW”,’ they wrote.

Kit and Rose, both 30, moved in together in May, when Harington declared himself ‘very, very happy’.