CELEBRITIES from Kylie to Stephen Fry and Chris Hemsworth have joined forces to push for gay marriage in Australia — after Meghan Trainor expressed anger that her image was ‘illegally’ used by the other side.

As Australia gears up to vote on the controversial subject, the tactics of the ‘no’ side got somewhat underhand, with someone using the Dear Future Husband singer’s image alongside the caption: ‘My vote is no.’

Meghan was horrified when she was alerted to the misappropriation, posting her full support for LGBT marriage. 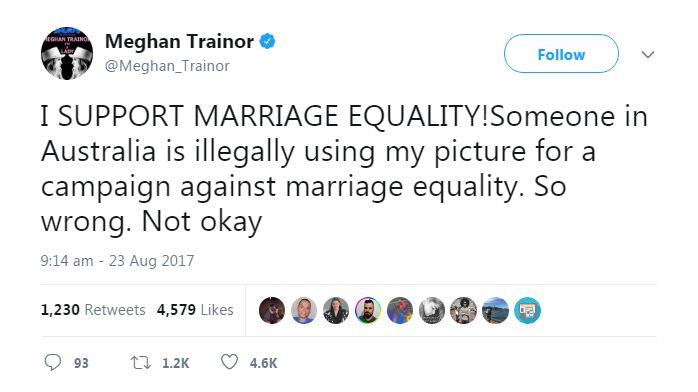 ‘I SUPPORT MARRIAGE EQUALITY!’ she tweeted, adding: ‘Someone in Australia is illegally using my picture… So wrong. Not okay.’

And Meghan isn’t the only one pushing for gay marriage to be legalised.

Kylie urged people to make sure they were signed up to vote, tweeting: ‘Aussies! #loveislove & it’s for everyone. Today is the final day to make sure you’re enrolled. Don’t wait!’

And Thor star Hemo also sought to hammer home his point by posting: ‘Dear open minded, free speaking, laid back, life loving aussies. Marriage is about love and commitment and, in a country based on equal citizenship, it should be available to everyone! Vote now for marriage equality.’

PREVIOUSLove Island ‘can be fatal attraction’

NEXTGMB: Richard Madeley rants at a guest then drops bombshell about daughter Chloe