KYLIE MINOGUE is singing from the rooftops because her new man has led her to ‘the best place I have ever been’.

In an exclusive chat with Guilty Pleasures, the Aussie pop princess admitted she wishes she’d met GQ magazine boss Paul Solomons years ago after she was left ‘broken’ by her collapsed engagement to Brit actor Joshua Sasse last year.

‘I feel like I’m in the best place I have ever been, I’m so grateful,’ Kylie told GP before she landed on the stage of London’s O2 Arena last night for her Golden tour shows.

After celebrating her 50th birthday in May with Solomons, she explained: ‘Whenever you meet someone, you are meeting that person at that point in your life.

‘Everything that has happened in the past makes you that person at that point. And I’ve met the person that a part of me would go, “How come I didn’t meet you until now?!” It was meant to be now!’

The Got To Be Certain singer is relishing having honesty in her life after pouring her heart out about Sasse, 30, in her No.1 album, recorded in Nashville.

‘I definitely was not heartbroken, I was broken,’ she insisted.

‘It wasn’t about someone else. It was about me. Where I’d let myself get to. When you kinda realise you’ve not been honest with yourself. That just liberates you.’

Now, she says: ‘I want authenticity in as many parts of my life as possible.’

Kylie, who has also dated Jason Donovan and INXS star Michael Hutchence, described her outlook as ‘a combination of my age, where I am at in my life and what I’ve been through’.

She added: ‘Even the experiences that part of me goes, “Oh my God! I wish that had never happened!” — they did, and if you look at the bigger picture, that is what we are doing throughout our entire lives… trying to figure it out!’

As for singing songs about Sasse in front of 43-year-old Solomons, Kylie said: ‘We’re grown-up enough to know the album was written on my terms. It was before that it was really not a good time for me.’

But all is rosy now for the superstar who concluded: ‘Certainly a year ago when I hadn’t even finished this album, the thought of having a No.1 album and being on tour… to say I am grateful is an understatement for so many things in life.’

Kylie on being inspired by Dolly Parton 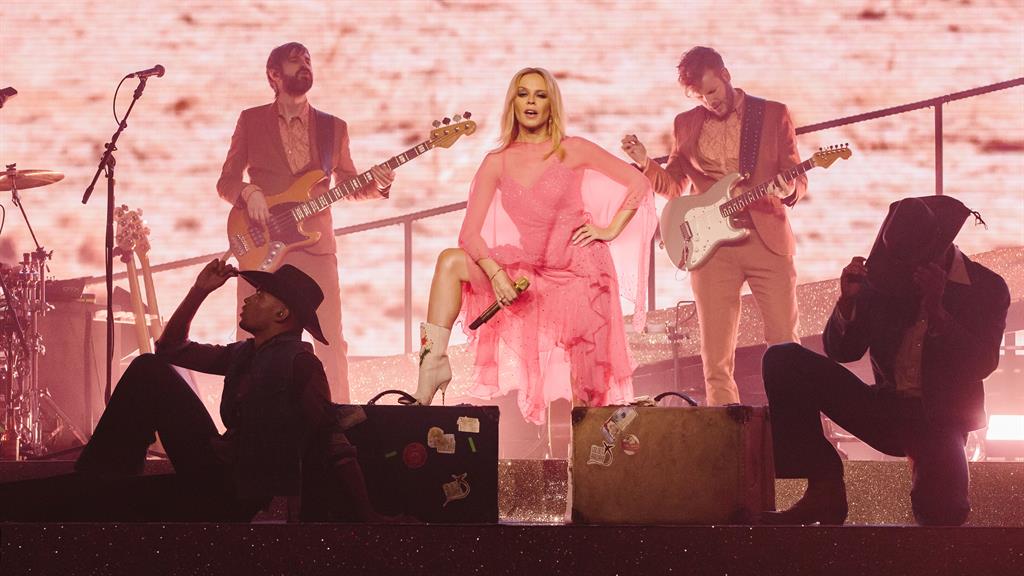 ‘WHEN I was in Nashville, the one bit of merch I got was a T-shirt that had “What would Dolly do?”

‘I admire all the women that have gone before me, that have done exactly the same thing.

‘No matter what is happening to them, good or bad, the show usually goes on… unless it’s something that stops you in your tracks.’