LADY GAGA has said the death of her Born This Way co-star is ‘beyond devastating’ as she called for improved awareness around mental health.

Rick Genest — also known as Zombie Boy — died aged of 32 on Wednesday in what Lady Gaga says was suicide.

The Canadian model was known for his head-to-toe tattoos and starred alongside Gaga in her Born This Way music video in 2011. 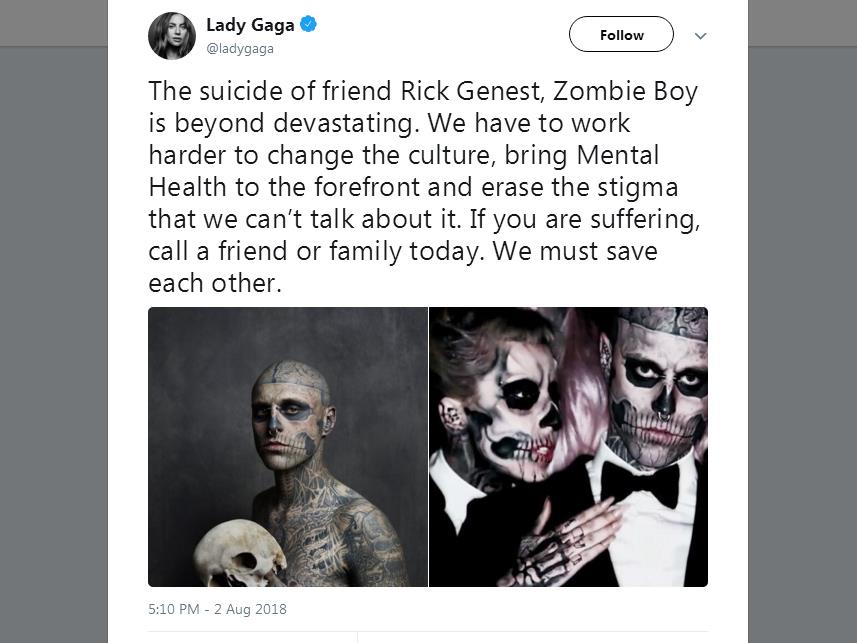 Yesterday she tweeted to speak of her heartbreak and call for improved awareness around mental health.

Alongside black and white pictures of the pair together, Lady Gaga said: ‘The suicide of friend Rick Genest, Zombie Boy is beyond devastating.

‘We have to work harder to change the culture, bring Mental Health to the forefront and erase the stigma that we can’t talk about it. If you are suffering, call a friend or family today. We must save each other.’

Gaga, 32, real name Stefani Germanotta, added: ‘Reach out if you’re in pain, and if you know someone who is, reach out to them too.’

She also pledged to raise awareness for mental health issues, saying: ‘Kindness and mental health aren’t one time practices. They aren’t just to do list items. This fall, in partnership with @btwfoundation, I’ll explore the power of habits to build cultures of kindness and wellness.’

Genest appeared in magazines such as Vogue, GQ and Vanity Fair.