LILY ALLEN has hit out at Piers Morgan after he accused actress Denise Welch of name-checking him to boost her profile.

The Hard Out Here singer pointed out that the former Corrie star had plenty of other ways to get publicity — including her son, 1975 frontman Matthew Healy.

Lily added that the Good Morning Britain presenter’s whole career is ‘based on using other people’s names and experiences’.

The spat kicked off because Denise branded Piers ‘outrageous’ in a Huffington Post interview about mental health, saying: ‘He shut all those people down who don’t have a voice.’

Piers responded on Twitter, writing: ‘I’ve noticed Ms Welch does this whenever she hasn’t been in the papers for a while. And it’s been a while.’

But Lily leapt to Denise’s defence, tweeting: ‘Lol, that you think you’re so press worthy. I can think of a billion other ways @RealDeniseWelch could drum up some interest if she was that way inclined. Her incredibly successful son being one of them.

‘And anyway form [sic] someone who’s [sic] entire career is based on using other people’s names and experiences [to] bring in the bacon. This is a bit , meh.’ 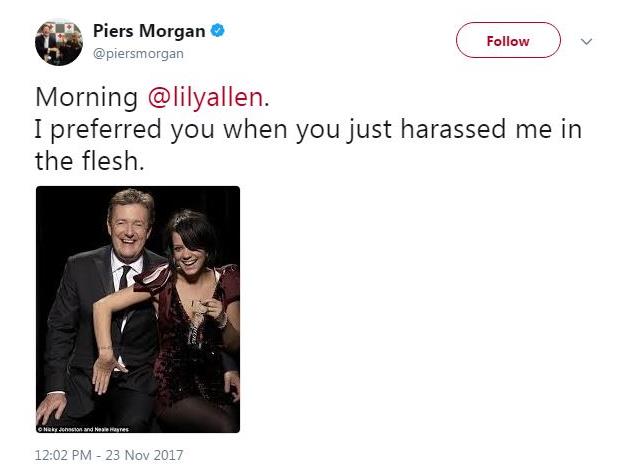 Unfortunately for Lily, Piers was able to dredge up a rather incriminating of her holding her hand over his crotch, which he posted alongside the message: ‘Morning @lilyallen. I preferred you when you just harassed me in the flesh.’