Lineker and Sugar pledge to Shirt Piers Up

PIERS MORGAN has agreed to make the ultimate sacrifice — swearing off Twitter and ‘generally running off at the mouth’ for a whole 24 hours in support of Red Nose Day.

The Good Morning Britain host kicked off the #ShirtPiersUp campaign this morning, also pledging to endure the ‘great humiliation’ of wearing a Spurs football shirt on Friday if public donations reach £50k. 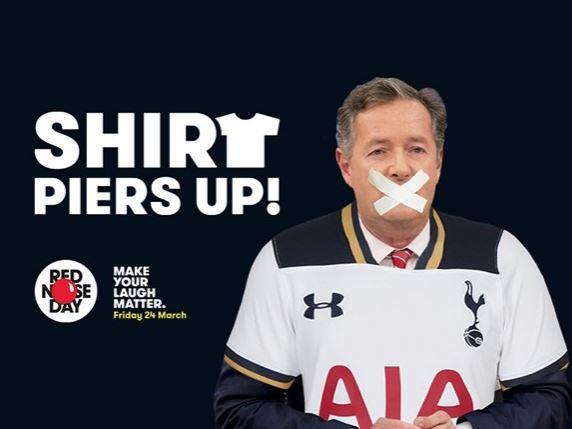 Writing on the ITV website he wrote: ‘As you can imagine, this doesn’t come naturally and I anticipate some relentless taunting (I’m looking at you, Gary Lineker…)’.

Sure enough, the former footballer, who has previously clashed with Piers, piled in offering to donate £2k if Morgan wears the shirt all day.

Quick as a flash, the outspoken host shot back with: ‘No chance. Make it £8 million then I can pay his redundancy cheque’. 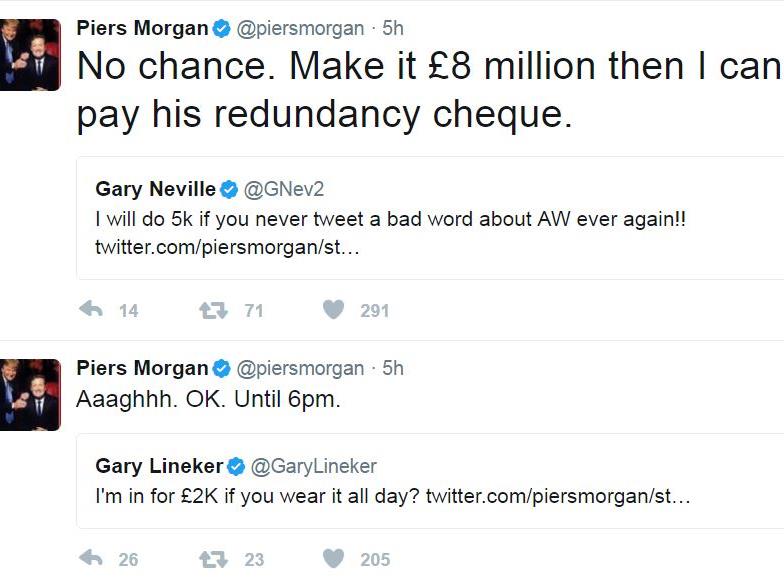 But Piers was not so dismissive when Lord Alan Sugar branded his sponsored silence the ‘bargain of the century’ and declared his £5k pledge was ‘my duty to the nation’.

In a Twitter video, The Apprentice host added: ‘Comic Relief, send me the bill straight away, I will pay it immediately.

‘It’s going to be a wonderful day without that nutter clogging up the whole of Twitter with his nonsense.’

This isn’t the first time Piers has been forced to hold his peace. In January, he appeared gagged alongside his co-host Susanna Reid at the National Television Awards — a reference to actor Ewan McGregor’s refusal to be interviewed by him on their daytime show.