STAR Wars actress Lupita Nyong’o has called out a magazine for altering her image on its cover ‘to fit a more Eurocentric notion’ of beauty.

The star, 34, who was raised in Kenya, appears on the front of November’s UK edition of Grazia, but she claims her hair has been ‘smoothed’ — and before and after photographs pictures clearly show the frizzy bun at the nape of her neck has been removed. 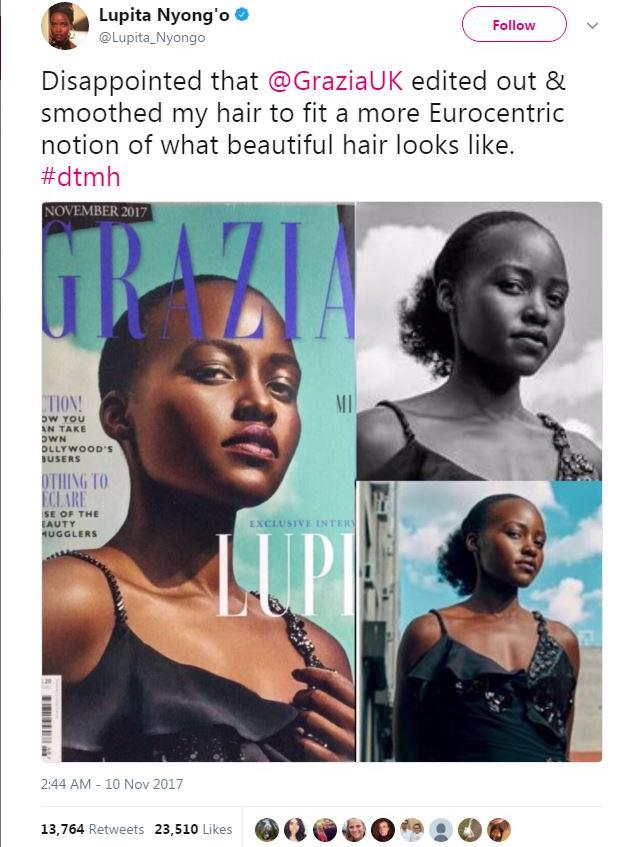 Taking to Twitter, Lupita said: ‘Disappointed that Grazia UK edited out and smoothed my hair to fit a more Eurocentric notion of what beautiful hair looks like. #dtmh’.

The hashtag, which stands for ‘Don’t touch my hair’, is a pointed reference to another hair controversy — that of Solange Knowles, who last year blasted a UK paper for an image they used of her on their cover.

Beyonce’s sister claimed it had been altered, writing on Instagram: ‘dtmh @eveningstandardmagazine’.

The paper offered its ‘unreserved apologies’, but she got her own back later, by releasing a track called Don’t Touch My Hair.

The Last Jedi actress Lupita may not have the vocal cords to sing about her upset, but she did take to Instagram to eloquently explain her distress.

‘As I have made clear so often in the past with every fibre of my being, I embrace my natural heritage and despite having grown up thinking light skin and straight, silky hair were the standards of beauty, I now know that my dark skin and kinky, coily hair are beautiful too,’ she wrote.

‘Being featured on the cover of a magazine fulfills me as it is an opportunity to show other dark, kinky-haired people, and particularly our children, that they are beautiful just the way they are.

‘I am disappointed that Grazia UK invited me to be on their cover and then edited out and smoothed my hair to fit their notion of what beautiful hair looks like.

‘Had I been consulted, I would have explained that I cannot support or condone the omission of what is my native heritage with the intention that they appreciate that there is still a very long way to go to combat the unconscious prejudice against black women’s complexion, hair style and texture.’

Grazia has since apologised ‘unreservedly’ to Lupita, emphasising its commitment to diversity.

‘Grazia is committed to representing diversity throughout its pages and apologises unreservedly to Lupita Nyong’o,’ its statement read.

‘Grazia magazine would like to make it clear that at no point did they make any editorial request to the photographer for Lupita Nyong’o’s hair to be altered on this week’s cover, nor did we alter it ourselves.

‘But we apologise unreservedly for not upholding the highest of editorial standards in ensuring that we were aware of all alterations that had been made.’

NEXTFamous Five: What happened this week in showbiz