STAR Wars: The Last Jedi has become one of the top 10 biggest films of all time in the UK, but that hasn’t stopped one disgruntled fan creating his own edit — cutting out all females.

The latest movie in the sci-fi series has now taken £79.9 million, placing it at number 10 — just behind 1975 horror classic Jaws — but over the weekend an anonymous user posted, we assume, ‘his’ own ‘more fast-paced’ 46-minute version.

Needless to say, the movie’s stars — from Mark Hamill to John Boyega — have all had something to say about this travesty, after film critic Priscilla Page flagged it up to them. 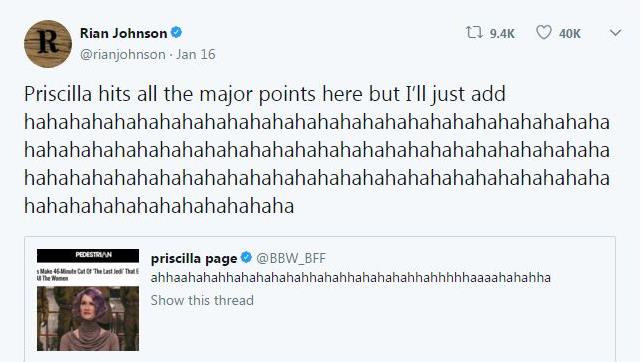 Then Mark Hamill and John Boyega piled in with a stream of laughing-till-I-cry emojis: 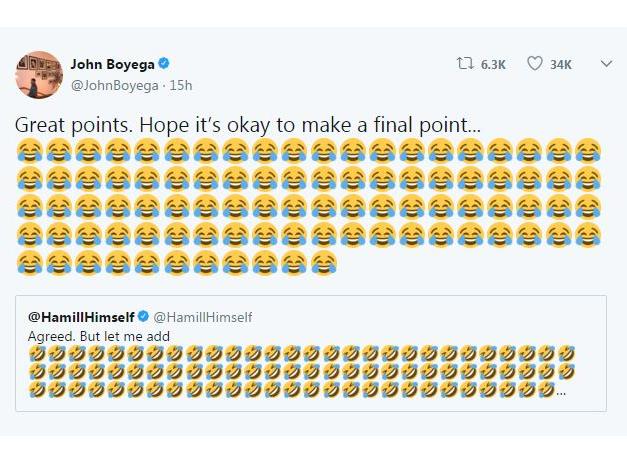 The new cut — titled by its creator The Last Jedi: De-Feminized Fan Edit (aka the Chauvinist Cut) — hacks down the original considerably from its two hours 35 minutes running time.

And its creator sets out his rationale in comments such as this: ‘When there’s a scene where a woman is cut in making some important statement that can be substituted by another statement by a guy, then she gets cut out.’

Perhaps he shouldn’t feel too aggrieved, however, as men fare considerably better in his cut of the new movie than the one created in 2015 that revealed women barely have a minute of dialogue in the entire original trilogy: