STORMZY has been reliving the shocking incident in which he woke up to find his front door being battered down by police.

The officers barged into his west London flat two months ago. They were responding to a neighbour who reported a burglary after seeing the grime star enter his own home.

‘People were asking, “You must be shocked”,’ recalled the 23-year-old Gang Signs & Prayer star. ‘I’m thinking, “Bruv, I’m not f***ing shocked!” As a black youth, nothing has changed. If someone doesn’t know I’m Stormzy, I’m a 6ft 5in dark-skinned brother in an all-black tracksuit with a gold tooth and a deep voice. If people have views already, I’m gonna fit that view.’ 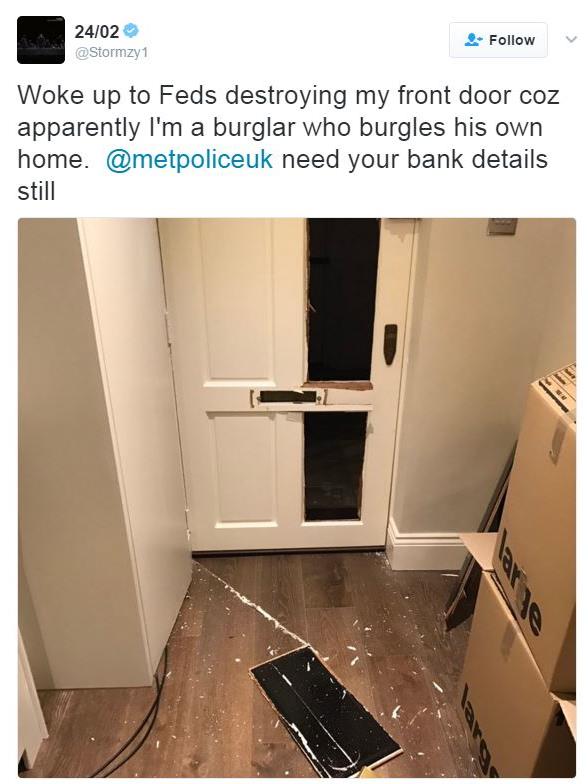 Sharing a picture of his smashed doorway in a WhatsApp group with his pals, the chart-topping MC said they came back with their own as a comparison. ‘Everybody in the hood knows, everybody in the culture knows,’ he explained.

‘But it’s good that now the world can see.’

Despite topping the charts with his debut album, Stormzy argues that he still isn’t part of the music ‘elite’. He told Fader magazine: ‘I’ve never understood this whole thing of there being this elite force in British music but on the side is grime and rap. I question s***. I ask, “Why can’t I get played on that radio station?” They might say something about the tempo, or the feel of the song. So when I’m in the charts, it’s [so I can] break the walls down, and say, “OK, what are you gonna say now? Why can’t you play me?”’

Last year he called out the lack of diversity at the Brits, describing it as an event for ‘the elite artists’. He added: ‘I am trying to be respected as one of those elites. I always say: infiltrate.’

NEXTWalliams and Cowell face off