Olivia Munn: I won’t be making a Pratt of myself with Chris

OLIVIA MUNN has shut down rumours that she is dating Anna Faris’s ex Chris Pratt — by pointing out the pair would have a ‘horrible’ portmanteau name.

While Brangelina, TomKat and Bennifer tripped off the tongue, The X-Men: Apocalypse star points out that should she and Chris start dating they’d be nicknamed the Olipratts.

Olivia also shared texts she sent to Faris in an attempt to stymie reports such as that in ET Online, which claimed she was seen looking ‘totally romantic’ with Chris on Friday night.

Taking to Twitter, Olivia provided an extensive list of reasons why she and Chris are not an item, finishing up with several attempts at conjoining their names: 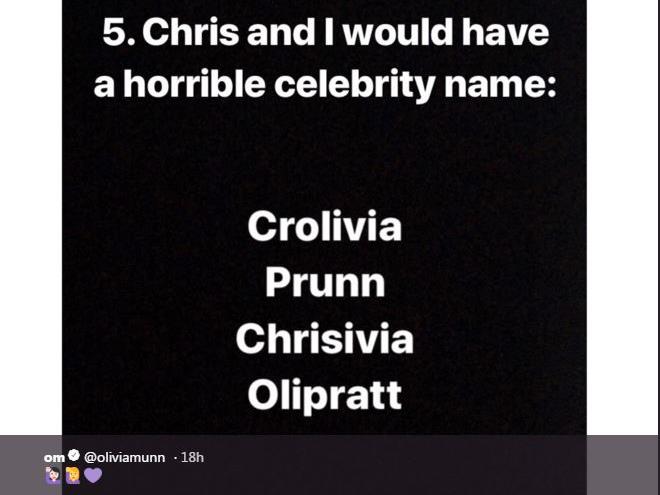 ‘1. Not every woman is scorned and upset after a breakup,’ she wrote.

‘2. Not every woman is ‘furious’ at another woman for dating her ex.

‘3. So even if I was dating @prattprattpratt, some tabloids got me and @annafaris all wrong.

‘4. Women respect and love each other a lot more than some people like to think.

‘5. Chris and I would have a horrible celebrity name: Olipratt’

Chris and Anna separated last summer and filed for divorce in December and Faris has since been seen taking a romantic boatride with cinematographer Michael Barrett in Venice.

Olivia, meanwhile, also posted screenshots of texts between herself and Anna, in which she assures Faris there is ‘0% truth’ to the rumours — and Chris’s ex responds warmly.

‘Hey there! Sooo…’ writes Olivia, ‘I would never respond to random tabloid stories, but since we know each other I wanted to reach out to you personally to tell you the story about me and Chris dating has 0% truth.

‘I’m sure you already know it’s not true, or maybe you didn’t care either way, but I just wanted to reach out personally to tell you it’s not true.’

Anna replied: ‘Hi!!!! Oh my god-this town is so f***ing crazy-you are so sweet to text-I love you-having said that if you were my new sister in law I would be thrilled! -lets please catch up soon.’

PREVIOUS5 Fast Ones… with Tom Walker

NEXTIt locks like Rita Ora’s having a wild time