IS FOR All over for Ant McPartlin following his own annus horribilis, which included a drink-drive crash, rehab and divorce from wife Lisa following a cheating storm — leaving the 43-year-old presenter out of this year’s I’m A Celebrity.

is for Beckham bombshell. In June Posh’n’Becks’ 19-year union was rocked by cheating allegations. David, 43, later admitted their marriage was ‘complicated’ while Victoria, 44, explained they worked better ‘stronger together’.

is for Could Richard Madden be the next Bond? The hunky Scot, 32, is the bookies’ favourite after pulling in the largest audience for a TV drama in a decade in his Bodyguard role, as kick-ass protection officer David Budd.

is for Didn’t do it. That’s what Dua Lipa’s model boyfriend Isaac Carew insisted after he was pictured dirty dancing with a mystery woman on the dance floor of London’s Heaven club in June.

is for Everything is fine — or is it? Cheryl and 25-year-old Liam Payne finally split after she claimed her friends had been peddling false break-up rumours. The pair tried to put on a united front with some sexy chat on live TV at the Brits in February, but they called it quits five months later, leaving 35-year-old Chezza holding baby Bear.

is for what the FK is going on here? Robert Pattinson’s ex FKA twigs sparked up a surprising new romance with Hollywood rebel Shia LaBeouf, 32, in September. They were spotted working up a sweat on a couple’s jog near the 30-year-old singer’s east London home.

is for Grande disaster. After the Manchester Arena terror attack last year, life pummelled Ariana Grande, 25, once again when she split from her boyfriend Mac Miller in May. By June she was engaged to comic Pete Davidson, 25, but the Thank U, Next singer ditched her fiancé after Miller died suddenly in September, aged 26.

is for Harington’s big day. Game of Thrones star Kit Harington, 31, made an honest woman of his former co-star Rose Leslie, also 31, when they married at her family’s Scottish castle in June. 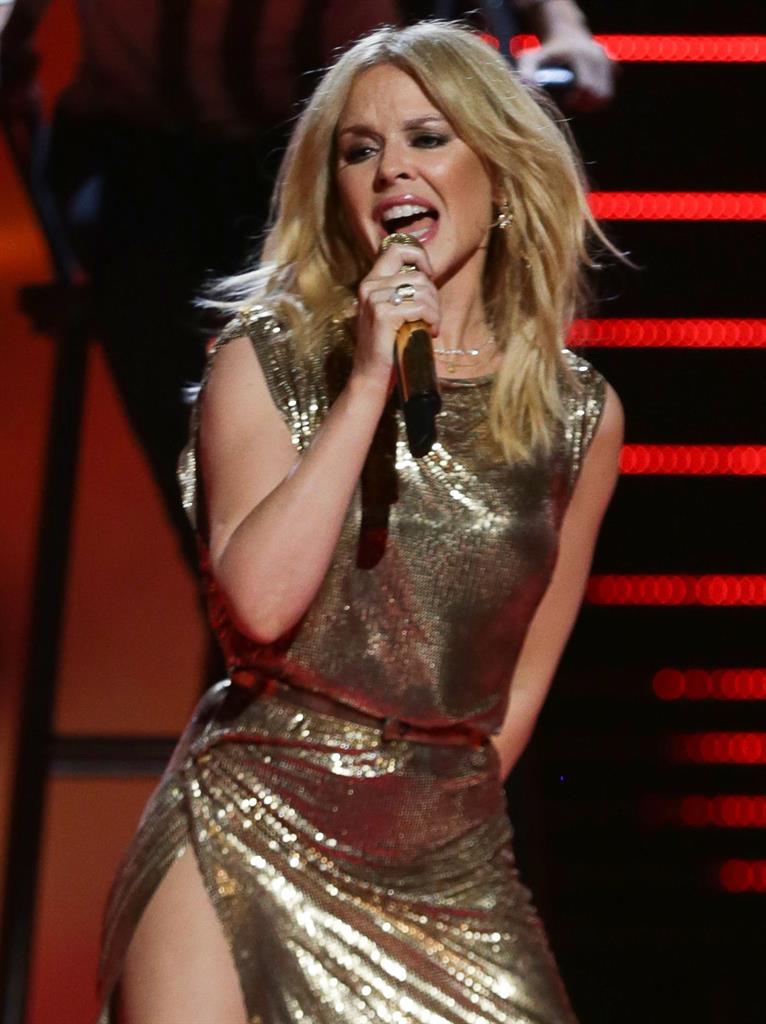 is for I Should Be So Lucky at 50. Kylie Minogue managed to turn around an awful 2017 which saw her engagement to Joshua Sasse finish amid cheating rumours. This year she bagged a new man, GQ magazine boss Paul Solomons, and a No.1 album, Golden, to mark her birthday milestone in May.

is for Just married for Justin Bieber. Months after his split from long-term ex Selena Gomez at the start of the year, the pop prince, 24, stunned the showbiz world by marrying another ex, 22-year-old model Hailey Baldwin, in September.

is for KO’d by Kim Cattrall, who revealed the full scale of the Sex And The City feud in February. The 62-year-old maneater dubbed former co-star Sarah Jessica Parker, 53, ‘cruel’ for sending condolences following the death of Kim’s brother. Replying publicly, she told SJP: ‘You are not my friend.’

is for Lucky TV and radio presenter Richard Bacon, who revealed he is back from the dead after a lung infection left the 43-year-old former Blue Peter star in a coma for seven days in July.

is for Mid-air scare. US rapper Post Malone, 23, is feeling Better Now after a private jet flying him from America to the Reading Festival during the summer was forced to make an emergency landing when the jet’s tyres burst into flames on take-off.

is for No I didn’t do that. Liam Gallagher and his girlfriend Debbie Gwyther furiously denied claims that the 46-year-old rocker ‘choked’ her in the hallway of London’s Chiltern Firehouse in August. They threatened to sue over leaked CCTV footage.

is for Overdose nightmare for Demi Lovato. The former Disney star, 26, has spent the last half of the year drying out after it was claimed she OD’d on heroin at her Hollywood mansion in July.

is for Portugal resident Madonna, who relocated to Lisbon when she turned 60 in August. Madge has turned into a ‘soccer mom’ while her adopted lad David Banda, 13, trains with the Benfica youth academy.

is for I Quit. Love Island’s Caroline Flack had to keep presenting the show through her own love-life woes in July when the 39-year-old cougar canned plans to marry reality star Andrew Brady, 28.

is for R-Patz is on the pull at Twilight. The 32-year-old actor was spotted snogging model Suki Waterhouse, 26, following their cinema date in Notting Hill in July.

is for Second time lucky. Gwyneth Paltrow, 46, married Glee boss Brad Falchuk, 47, in The Hamptons in September after the former Mrs Chris Martin explained she is simply the marrying kind.

is for This Is America wake-up call. Childish Gambino ignited the debate surrounding race relations in the States in May, with his ground-breaking music video.

is for ‘Unpaid child support’ and Uni professor lover. The gloves came off in Brad Pitt and Angelina Jolie’s divorce battle when she publicly accused him of not coughing up enough money for their six kids. Meanwhile 55-year-old Brad was preoccupied with attractive university professor Neri Oxman.

is for Very stupid thing to say. Kanye West walked into a backlash in May when the 41-year-old rapper claimed that slavery ‘is a choice’.

is for Walsh snog-gate. Comic Seann Walsh was dumped by his long-term girlfriend Rebecca Humphries in October when the 32-year-old was busted drunkenly snogging his Strictly dance partner Katya Jones, 29, on Rebecca’s birthday. 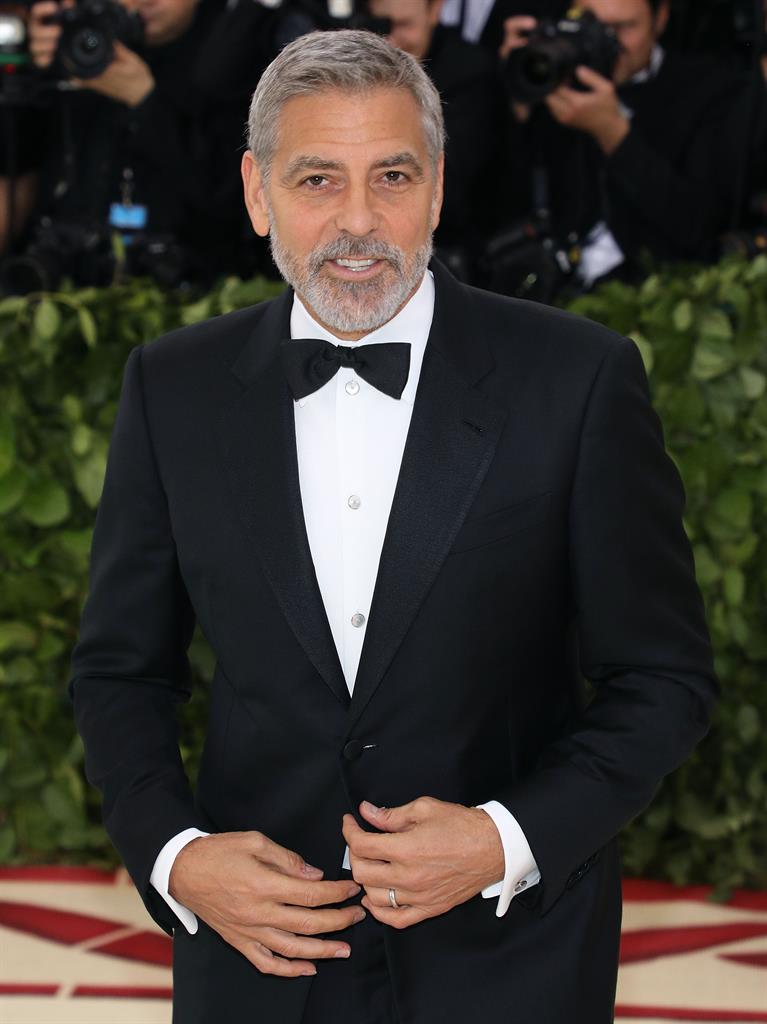 is for X-rays for George Clooney. The 57-year-old A-lister was left hobbling in July after a car knocked him off his motorbike during filming in Sardinia.

is for You might want to rethink that. In August Roxanne Palett, 35, declared herself the most ‘hated woman in Britain’ after she made up an assault by Ryan Thomas, 34, on Celebrity Big Brother.

is for Zame as usual. After calling it quits in March following two years together, Zayn Malik, 25, and Gigi Hadid, 23, were back together within months, happily ever after in time for Christmas.