PERRIE EDWARDS scored an own goal with Liverpool fans by sitting on the fence while watching her boyfriend Alex Oxlade-Chamberlain’s Champions League clash with Manchester City.

Despite the Little Mix singer’s lover playing for the Reds, the 24-year-old decided to wear the colours of both the Merseyside team and the light blue of rivals Manchester City.

Her neutral stance went down like a lead balloon with onlookers at Anfield when she was filmed in the stands with her half-and-half scarf on Wednesday night.

But she remembered to cheer on Alex, also 24, who helped sink the premiership leaders by scoring the second goal in Liverpool’s pulsating 3-0 first leg quarter-final upset.

One complained on Instagram: ‘Why has no one told Perrie that half-and-half scarves aren’t okay… c’mon girl.’ Another tweeted: ‘She’s dead to me now.’ Yet another added: ‘Perrie Edwards was at the game today in a half-and-half scarf so little mix are cancelled sorry.’ 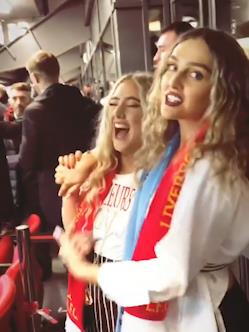 Despite her inability to pick a side, the Geordie lass was clearly supporting her lover when she was filmed belting out Liverpool’s anthem You’ll Never Walk Alone.

NEXTJess Glynne: I had to take a reality check