The news comes as a particular surprise given that the Bafta-winning Car Share comedian’s tour sold out so fast just last month that the original 26 gigs were expanded to more that 80 dates.

Kay also revealed at the time how much he missed doing stand-up, saying: ‘I can’t wait to get back up on stage.’

But today, just weeks later, the funny man released a statement on his official Twitter account, saying that he was cancelling ‘all live work commitments’, including an intimate one-off gig for Children In Need.

‘Due to unforeseen family circumstances, I deeply regret that I am having to cancel all of my upcoming work projects,’ it read.

‘This unfortunately includes my upcoming stand-up tour, Dance For Life shows and any outstanding live work commitments. My sincerest apologies.’

Kay said the decision ‘has not been taken lightly’, adding: ‘I’m sure you’ll understand my family must always come first.’

He also appealed to the public and media to ‘respect our privacy at this time’. 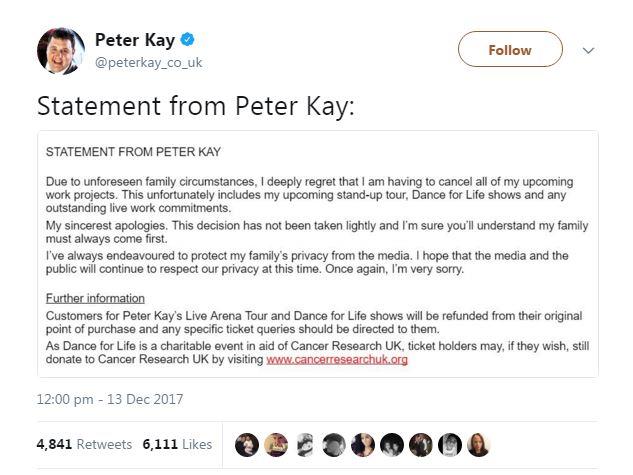 Concerned fans were overwhelmingly supportive of their comedy idol.

One commented: ‘Omg wishing you and your family well. It’s quite right to put your family first xx.’

Another agreed, posting: ‘Peter, people will understand don’t worry! Family life is more important than anything… Hope the reason for the cancelation gets better… big HUGS coming to your family!!!’

Many others said they were similarly ‘gutted’, including one who added: ‘More importantly it sounds like something serious has occurred though. Hope him and his family are all okay.’

Kay’s statement promised refunds for all arena tour and Dance For Life tickets and advised customers to contact their point of purchase with queries.