PIERS MORGAN has upped the ante on David Beckham’s controversial kissing snap with his daughter — by planting his own smacker on the lips of Peter Andre.

Earlier this week, the ex-footballer shared a snap of himself pecking Harper, seven, on the lips while on a dad-daughter trip to London’s Natural History Museum ice rink. 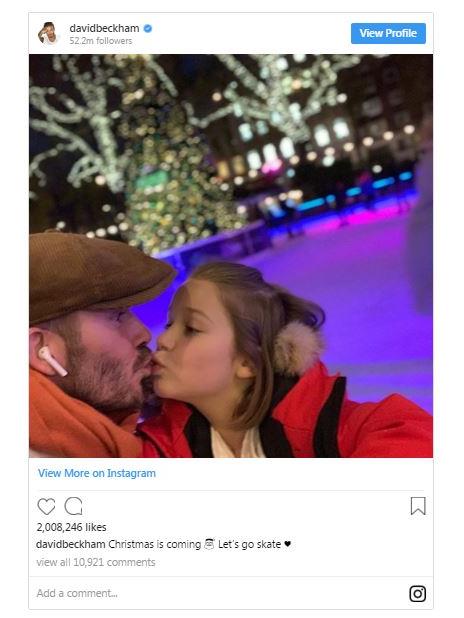 But while many fans thought it was ‘adorable’, others including Piers branded it ‘weird’.

Today on Good Morning Britain, the outspoken host said: ‘If the kid’s seven, you don’t kiss them on the lips.

‘My sons got a firm handshake or the 50 Cent shoulder thing, or a full manly hug.

But Peter Andre, who was guesting on GMB, wasn’t quite so sure, saying: ‘I agree with some of the points, you’re opening yourself. You are taking the innocence out of everything, we are too PC.

At which Piers popped over and planted a kiss on the Mysterious Girl singer’s lips — before pulling away and joking: ‘That felt worryingly good!’

His co-host Susanna Reid wasn’t too sure about Beckham’s show of affection either, but her objection was somewhat different.

‘I just have an issue with posting it,’ she said. ‘If you post it then you’re up for the scrutiny.’

Piers agreed, saying: ‘They want their kids to be famous and then they complain about their privacy.’

But David has previously defended his affectionate stance towards his kids, saying: ‘I kiss all my kids on the lips… We want to show our kids love and we protect them, look after them and support them.’

PREVIOUSBob Dylan and Neil Young blow in for UK gig