PIERS MORGAN has vowed to continue his search for ‘two scumbags’ who ‘smashed up’ his son’s car and stole his coursework.

The Good Morning Britain presenter first alerted Twitter to the incident on Wednesday, posting: ‘To the 2 scumbags on a motorbike who just steamed my middle son’s car at a West London M&S garage, smashed it up & stole his bag containing 2yrs of study work… I will find you.’

He added somewhat ominously: ‘Consider it a promise not a threat. #cctv’. 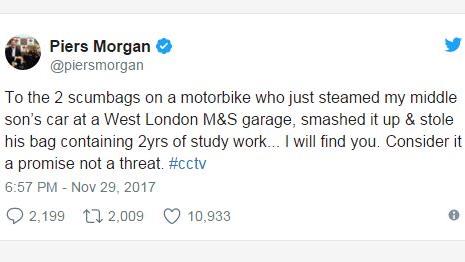 Morgan’s son, Stanley, had uploaded a video to Instagram showing his car covered in glass.

This morning, Piers had an update: the books have been found — but he’s still on the warpath.

‘UPDATE: My son’s study books have been found & returned to him,’ he posted, before adding a scathing assessment of the perpetrators’ intelligence.

‘The moped thieves dumped them in the River Thames a mile from crime scene, but at low tide… proving they are thick as well as nasty.

‘My thanks to the lady who found them. My search for these scumbags continues.’ 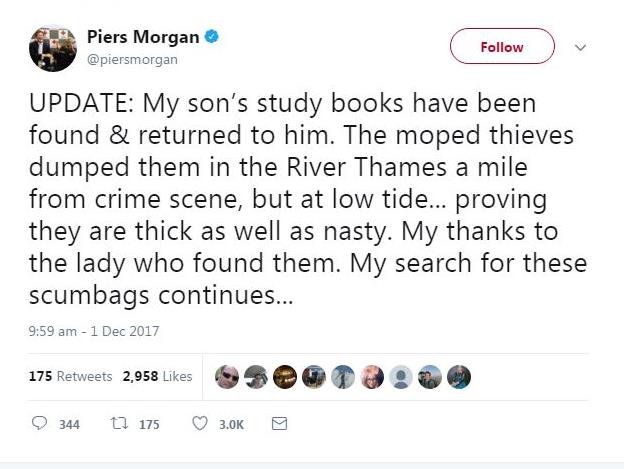 Sadly, there have yet to be any arrests and the Met Police are asking anyone with information to contact Hammersmith and Fulham police.