PIXIE LOTT and fiancé Oliver Cheshire say their big day won’t be all about them — as they want to use the wedding to play matchmakers.

The loved-up pair told Guilty Pleasures about their plans for next summer’s union while eyeing up honeymoon destinations.

And it sounds like the ceremony will resemble an episode of ITV dating show Take Me Out — as Pixie, 27, will have 20 bridesmaids, while Oliver will be supported by an army of lad pals.

‘Pixie’s favourite thing in the world is playing cupid,’ said Oliver, 30. ‘I reckon there could be love for a bridesmaid as I’ve got a few single mates.’

And Pixie gushed: ‘I would love that. It could start another wedding!’

‘I set up a blind date for a friend recently. That went well,’ she said. 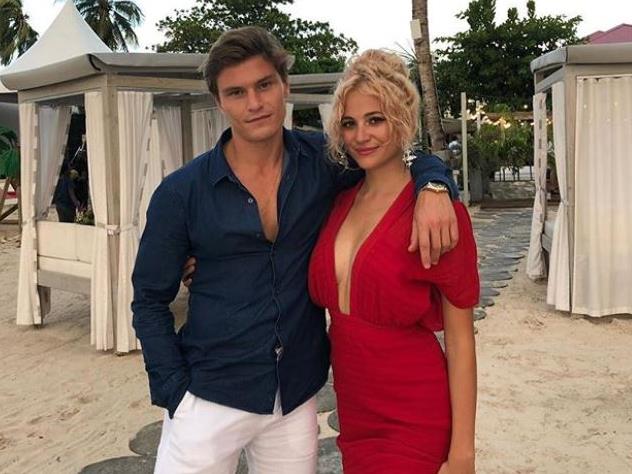 She and model Oliver have spent the past week in Barbados getting in the mood on a romantic trip of their own.

‘We are so busy all the time, so it’s great to have quality time together,’ Pixie said during her stay in The House by Elegant Hotels.

They have landed plenty of ideas for their big day after being flown to the Caribbean island by Sir Richard Branson for the launch of the Virgin Holidays’ Departure Beach in Bridgetown.

And after being treated to a luxury pre-flight concierge service, the couple are sold on Barbados as a honeymoon destination. ‘The locals are incredible,’ said Oliver. ‘I was running on the beach in the morning and everyone was like, “Hey Olly!” They are so friendly.’

The couple were among stars thrown a lavish beach party under fireworks by the billionaire airline boss, where Stormzy’s girlfriend Maya Jama, 24, spun some tunes.

And Pixie and Oliver, who were pictured sunning themselves in matching blue swimsuits during their trip, found it a struggle to leave

Virgin Holidays’ Departure Beach bar before their flight home. Oliver teased: ‘They might need someone to crack the whip to get you from the bar to the plane.’

NEXTLittle Mix hit back: No Mix-ed message as girls tell trolls to ‘bore off’