GREAT British Bake Off judge Prue Leith has spoken of her ‘panic’ after accidentally revealing the show’s winner ahead of time.

Prue was in Bhutan when she tweeted her congratulations to winning baker Sophie Faldo last month, hours before the Channel 4 final. 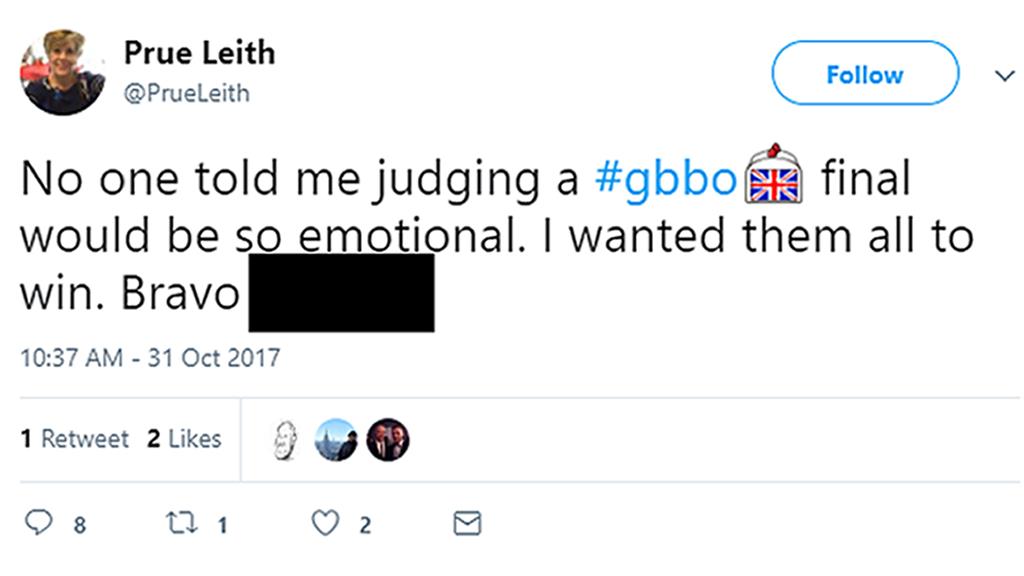 At the time she explained it was the change in time zones that got her in a tizz.

‘I’m in Bhutan. The time difference is massive,’ she said. ‘I thought that they got it six hours ago.

Now Prue has revealed what happened during what must have been one of the worst minutes and a half of her life.

‘I was in such a panic, I couldn’t work my phone. I couldn’t delete it,’ Leith said.

‘So I rang my secretary and she said: “Don’t worry, I have already done it” — 89 seconds afterwards, but it was too late.’

And although Sophie, everyone else at Bake Off and her employees Channel 4 were very supportive, Prue revealed: ‘It was days before I could sleep properly.’

But one good thing did come out of the gaffe — and that’s a potential boost to Bhutan’s tourism industry.

Prue told RTE’s The Ray D’Arcy Show that the nation’s PM Tshering Tobgay called her after the error sounding ‘rather pleased’.

NEXTIt all goes a bit Ex-factor for Harry Styles…