Pussycat’s out of the bag on Strictly’s latest star

PUSSYCAT DOLLS star Ashley Roberts sounded a little put out this morning, when the announcement that she’s the ninth Strictly Come Dancing signing came out a little too early for her liking.

It seems Ashley was on her way to Chris Evans’ BBC Radio 2 breakfast show to break the news to fans of the BBC’s flagship dance show when producers pipped her to the post with a tweet of their own: 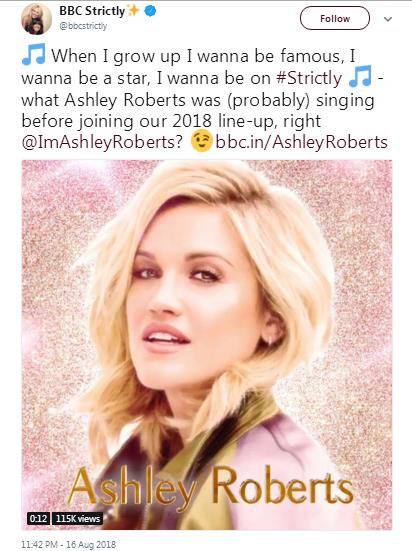 The singer responded: ‘En route to @achrisevans Heard ya mentioned my name already. Why did I have to get up so early!?!’

But we don’t think she was too put out as she later tweeted: ‘So… the pussycat’s out the bag!! Ahhh sooo beyond excited for this adventure!!! CAN’T WAIT!!’

Speaking on Chris’s show a little later, Ashley admitted she had been an 11th-hour addition to the line-up.

‘They reached out kind of last minute, to be honest, and when I got the call I was super excited,’ she said.

She’s also revealed she’s got some anxieties about the high-profile gig.

‘The Latin and ballroom world is foreign to me — I have more and more butterflies in the belly,’ she said.

‘I am nervous excited. I’m anxious to learn something new and put on the costumes and become the character.

‘I am just going to throw my heart and soul into this and hopefully it goes well.’

Hopefully she can get some tips from her many celeb mates who have previously taken part, though.

‘Daisy Lowe loved it, Flacky said it was one of her favourite projects,’ she said. ‘Pixie [Lott] and Laura [Whitmore] loved it! ‘So I’m excited to dive into my own experience.’

Roberts spent seven years in The Pussycat Dolls before leaving the group in 2010.

She has since had a successful broadcast career, making regular appearances on Ant & Dec’s Saturday Night Takeaway and judging on Dancing On Ice.

She has also no stranger to reality television, taking place in I’m a Celebrity…Get Me Out of Here! and The Jump.