‘BEST family friends’ Richard Bacon and Giles Coren have had a fallout — after the former Blue Peter presenter posted a heartfelt message of thanks to the doctors and nurses who saved his life last month.

Richard (pictured above), who was put in a medically induced coma at a London hospital after being struck down by a serious lung infection in July, made the warm comments after watching a show by campaigning comedian Mark Thomas.

Posting a video of the standing ovation for Thomas on Instagram, Richard wrote: ‘You don’t have to have had your life saved by them in the last month to think this is standing ovation sensational. Angry comedy, part celebratory. But with a point… He’s the best at this. Mark Thomas on the NHS at 70 at the Edinburgh Festival.’ 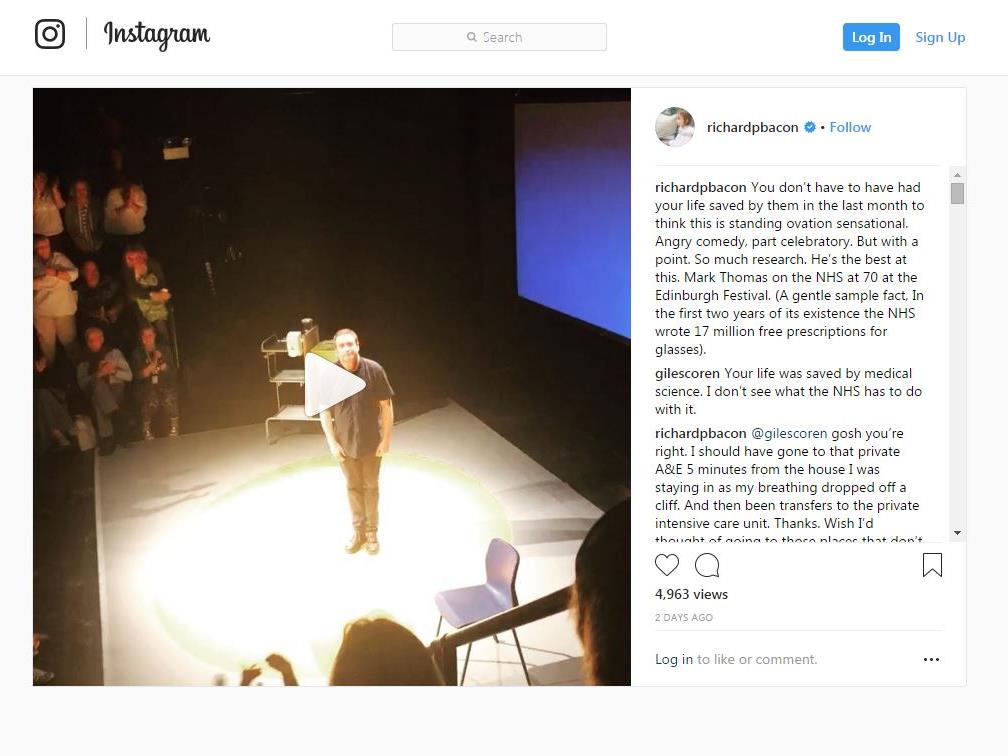 But his journalist pal Giles — who has previously described Richard and his wife Rebecca as ‘our best family friends’ — took issue with this, writing in the comments section: ‘Your life was saved by medical science. I don’t see what the NHS has to do with it.’

But Richard wasn’t having that, hitting back sarcastically with: ‘Gosh you’re right. I should have gone to that private A&E 5 minutes from the house I was staying in as my breathing dropped off a cliff. And then been transfers [sic] to the private intensive care unit. Thanks. Wish I’d thought of going to those places that don’t exist as I was dying.’

But Giles, known for his exactitude, pointed out the NHS is just an ‘organising structure’ and that Richard would have received the same care in ‘any developed country’.

Demonstrating why they’re mates, Richard slapped back with his own point of pedantry, saying: ‘You stated, present tense, “I don’t see what the NHS has to do with it”. What didn’t they have to do with it?

‘Any [sic] besides, there was one individual, called Vic, who’s committed himself to public healthcare, to the NHS, who made a crucial decision (which I’ll explain when I see you) that saved me… There is no guarantee that without him, this outstanding bloke, in that moment, that I would have survived.’

It was then Giles made a critical mistake, by saying: ‘I understand the impulse to make sense of a near death experience by politicising it in terms that a snowflake social media fan base will rise and applaud to but the fact remains that medical science and devoted personnel would have saved your life regardless (and hurrah for that!).’

Cue a blistering put-down from Richard: ‘You’re just wrong on this. You haven’t spoken to me in detail. And btw, you’re the one f***ing politicising it. I just stated factually that I was treated / saved by the NHS. You countered with some nonessential fatuous statement that you couldn’t see what the NHS had to do with my care.’

He rounded off with: ‘I don’t know why you’re being pointlessly provocative when you don’t know the specifics… And don’t patronise me by telling me I’m trying to “make sense of a near death experience by politicising”.’

This seemed to do the trick as Giles replied: ‘Okay. Won’t. But can I still patronise you in other ways?’

The friendship seemed to be saved when Richard later commented: ‘Of course.’