Reese Witherspoon confirms one Elle of a Legally Blonde 3 comeback

Reese, who played the character in the original 2001 film and its 2003 sequel, confirmed the new movie on her Instagram account today — to much excitement from fans, who have been waiting 15 years for a follow-up.

In classic Elle style, Reese glides across the screen on an inflatable wearing a bright pink bikini in the short clip, which she posted to her 13.2million followers. 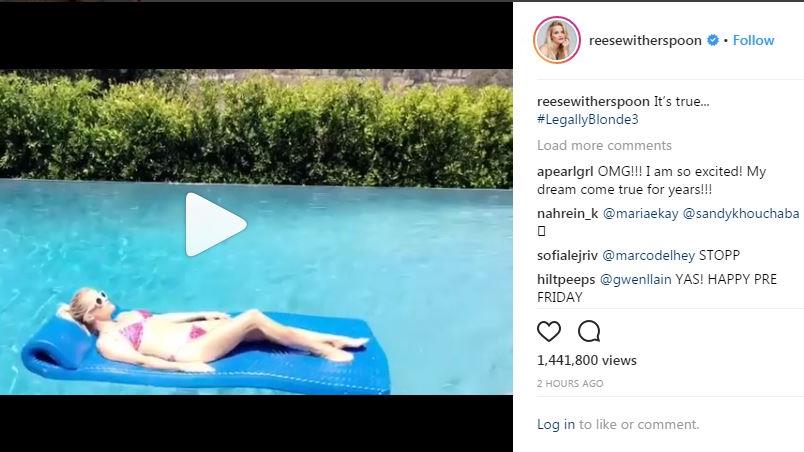 Alongside the video, she simply wrote: ‘It’s true…#LegallyBlonde3.’

The news came after Deadline revealed that Reese was ‘near a deal’ with MGM to reprise the role.

But there’s no detail as yet about whether other original cast members, such as Luke Wilson, will be returning.

That didn’t stop a general outpouring of enthusiasm, however. One fan summed it up by commenting on the post: ‘OMG!!! I am so excited! My dream come true for years!!!’

Another admitted that Elle had been her inspiration, writing: ‘Can’t wait!! I’m a lawyer in Brazil because of Elle Woods. 💖🏛📚👠💄👜’

Someone else predicted the third film is ‘going to be epic’, after the second installment saw Elle fight animal testing and end up setting her sights on the White House.

No plot details are yet available, but Deadline reports it’s going to be ‘in the spirit of the first film’ and will centre on female empowerment.